The sun was beaming from a bright blue sky when we began our ”autumn holiday” on the Bay of Corinth. We had our winter base in Mesolongi sorted out, but the winter was still a long way away! The day turned very hot, and a gentle breeze started in the afternoon. We rolled out our big genoa, and let the boat move downwind at her own chosen speed. There was no hurry, but our big lady seemed to be waking up as the wind gradually freshened, and was making good speed. Soon we could see the Rio-Antirrio Bridge looming in the distance. This imposing bridge that opened just before the Olympic Games of Athens in 2004, separates the Bay of Patras from the Bay of Corinth, and connects the Peloponnese to the Greek mainland.

The central channel is 45 metres high – we were advised to use one of the slightly lower side channels. There was a lot of room above our 19 metre (64 ft) mast, but going under a bridge always looks scary from below! 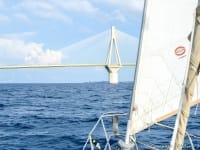 The wind was really starting to blow now, and thunder clouds seemed to be gathering, as we parked on a floating pontoon outside the town of Nafpaktos. Evening entertainment: heavy rain showers!

Nafpaktos is an ancient city, with the remains of an acropolis on the hill behind the town. During the middle ages a castle was built on top of the hill, and the town was ruled in turns by the Venetians and the Turkish Ottomans. We, on the other hand, were ruled by the weather: every time we tried to climb the hill to see the castle, a great thunderstorm rolled in from the sea. The landscape was like a grey watercolour painting. We decided to come back another time, with nicer weather.

We continued our trip. About ten miles westward we stopped on the island of Trizonia. It’s the only inhabited island in the Bay of Corinth, and has a beautiful harbour sheltered from all winds. We were told it was a ”ghost marina” until very recently – there are plenty of similar marinas around Greece. Many sailors stay in them, despite the lack of any services, and over the years the docks fill with abandoned boats. But Trizonia seems to have succeeded in turning the sad process into a developing marina: the sunken boats have been removed, the surroundings are neat and tidy, and there’s water and electricity available on the dock now. We gladly paid 9€ per night for the convenience, especially as the payment was collected by the mayor himself every evening!

Trizonia is a very pretty, idyllic little island. We enjoyed our first visit so much, we came back on our way home, and stayed over a week. The photos on this blog post are from both of those visits, from early and late October. Trizonia is a popular tourist destination during the summer season, but in the late autumn it was much quieter. Only 40 people live on the island over the winter, and just one of the many restaurants stays open all year round. The nearest grocery store is on the mainland opposite the island, and there’s a regular ferry. For sailors who like the peace and quiet – like us! – this would be an ideal place for overwintering. But we have a number of boat projects that need to be tackled during the winter, so it’s more practical for us to be closer to chandlers and hardware stores.

While our sailing friends in Finland were hauling their boats out of the water and preparing them for the winter on the hard, we, quite shamelessly, enjoyed the hot summer days and swimming in warm water – still +24°C (+75°F)! We made long walks to the hills of the island, where you can see the mountainous coast lines on both sides of the Bay of Corinth. We found olive groves, flowering plants, pompous villas and empty old houses, and many, many different animals. The island seems to be a real animal paradise!

On the gravel road we almost ran into a land tortoise, who, after hiding for a while, decided we were not too dangerous, stuck out its head and feet and disappeared into the bush.

The many flowers by the road attracted butterflies and dragonflies. We saw rabbits hopping about the vegetable gardens – they looked more like runaway pet bunnies than wild animals because of their many different colours.

The King of the marina was a beautiful Egyptian goose, a long time resident. He had lost his spouse, and didn’t seem interested in the native country geese on a nearby farm – after all, the Egyptian goose was a holy bird in the ancient times!

Another marina character was a big, yellow tomcat, who took us under his protection. He liked to rest on our cool sofa during a hot day, and kept us occupied with petting and scratching related activities. This cat we called Scarface was very sophisticated, never entered without permission and enjoyed a good conversation – quite different from the other stray cats of the island. We were told he was a boat cat someone had left behind. He had lived and prospered on the island for many years.

In October a few of the restaurants were still open. They were all good, but we found our favourite, and returned almost every night for dinner. The food was inexpensive, but, most importantly, it was delicious! We always chose the day’s special, and many a Greek traditional dish ended up on our list of favourite foods.

From Trizonia our journey continued to the town of Itéa. There we would catch a bus and see the temples of Delphi. More about that, with plenty of photos, in the next episode!

Click here to see the latest info on Trizonia marina on Noforeignland!