Our sailing journey had taken us from one Venetian castle to the next, from Lefkada to Vonitsa and then to Parga, which I wrote about in my last post. Now we continued towards Corfu, the northernmost of the Greek Ionian islands.

We spent one night along the way in a randomly chosen little bay, and arrived in the anchorage outside Corfu Old Town, also known as Kerkyra, on August the 29th. This town, like Parga and Vonitsa, is protected by a dominant castle. The large fortress fills an entire promontory, where the whole city of Corfu was located during the Byzantine era. The Venetians built a new fortress, and added a huge moat to divide it from the mainland and the newer part of the city, also surrounded by great stone walls. This fortress was able to repulse three major Ottoman attacks in the 16th and 18th centuries. Today the fortified town is a Unesco World Heritage site*. 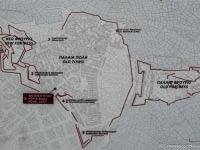 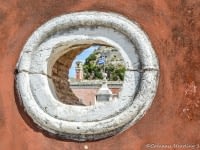 Corfu has a very Italian, or Venetian, atmosphere – or you could call it European or Mediterranean. It’s not typically Greek, that’s what I’m trying to say, at least based on the little glimpse we’ve seen of Greece so far. Because the town grew inside city walls, it’s very compact and maze-like. The houses are tall and colourful. They open up to the narrow streets with archways filled with little shops, cafes and restaurants. Many buildings are carefully restored, some are decayed in a very picturesque way. This coexistence of polished and worn is so natural and beautiful, that we’ve seldom felt so much at home as we did here. And as a largely pedestrian town, it’s very cosy because there’s no traffic noise. In Corfu town you hear footsteps echoing from the stone walls, people chattering, music from the restaurants and the loud chirping of the huge flocks of swallows that fill the sky above the city.

As the dusk fell, we meandered through the town, enjoying the velvet warm evening in the lively narrow streets and squares. In Finland this last weekend of August is traditionally celebrated with candles and fireworks as the end of the holiday season, as well as the end of the sailing season, and called the “Venetian weekend” – what could be a better way to celebrate the Venetian weekend than in an old Venetian town! We weren’t ready to end our sailing season yet, though – why, we had just barely begun after spending two months on the boatyard!

In the Town Hall square we sat down for a glass of wine and to observe the busy life around us – families enjoying their dinner, tourists looking for a place to dine, boys playing football on the town hall stairs. Soon we noticed a restaurant in one corner of the square, that was absolutely packed, with several people waiting outside for a table. It must be a good place, we figured – and we were not disappointed!

We spent almost a week in Corfu, anchoring in the bay. Every hour or so a party boat would sail through the anchorage, with flashing disco lights and loud music, but otherwise it was a pleasant place to stay.

In front of the castle there was a handsome selection of anchored superyachts. These two were our personal favourites.

We went on a dinghy ride into the moat that separates the castle from the city. It’s full of small fishing boats, and on the shore there seemed to be a number of do-it-yourself summer cottages leaning against the great city wall.

Not far from the fishing harbour, there’s the park and palace of Mon Repos. The palace, that today houses an archaeological museum, is the birth home of Prince Philip, Duke of Edinburgh, born here in 1921. We photographed the palace from the sea on our way back south.

Now our tour of Venetian castles was over – for a while, anyway, as we are quite certain we will find more soon enough! We headed towards the island of Paxos, south of Corfu. More about Paxos in the next post!

* Other Unesco sites we have visited along our sailing journey: the Malbork Castle in Poland, the island monastery of le Mont-Saint-Michel in France, the famous pilgrim city of Santiago de Compostela in Spain, and beautiful Porto in Portugal.