Sometimes I think about what it would be like to be Greek. To have been born on a random island or a section of the coastline, where ancient bronze statues wash up on the shore on a regular day. Every hill around your home village would be an alleged birthplace of some son or daughter of Zeus’ seventh wife. The olive tree in your backyard would have been there when Aristotle was a little boy. Your grandfather would have grazed his sheep on a field where the Greeks once fought the Persians.

Coming from a country where a few iron age skis and dugout boats have been found buried in the mire, it can be overwhelming to see these signs of ancient cultures wherever you happen to land your boat. It’s not everyone’s cup of tea, these piles of rubble, but for someone who once spent a term or four absorbed in cornices, triglyphs and metopes, it is fascinating to see them growing wild in their natural habitat (but don’t ask me what they are exactly). 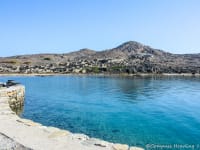 So far, of the ancient sites we’ve seen, the sanctuary at Delphi has made the biggest impact on us. I also found the temple of Aphaia, on Aegina, very impressive. This time we’ll visit Delos, the most sacred island of Greece. After exploring the Byzantine history of Naxos, we’ll leap two thousand years further back in time. A different era, different gods, different temples, but the same eternal sea and the Greek blue sky surrounded us on this sunny and warm late October day, as we departed from Naxos.

The north wind that had held us captive for a week had finally subsided. We sailed leisurely downwind, about twenty miles north, and anchored in a sheltered cove of Ríneia. This rugged island consists of countless little bays in between low hills. It’s only a short dinghy ride from Delos, where anchoring is only allowed during daylight hours.

Delos harbour, with the main sanctuary on the right, and Ríneia in the background. Click the picture to open it in a bigger window!

Delos is the birth island of the most famous twins in Greek mythology, Apollo and Artemis. These two were the result of their father Zeus’ escapade. Their mother, Leto, had a particularly difficult time trying to find a safe place to give birth (another legend with the same dilemma comes to mind), as Zeus’ wife Hera kept chasing her around the archipelago. At the very last moment, Zeus, with the help of his brother Poseidon, managed to kick up a small, rocky island from the bottom of the sea, and on this island, the twins were finally born. Phew – exciting twists and turns of the divine life!

The Ionians brought the cult of Apollo to Delos around 1000 BCE, and the legend made the island a Panhellenic religious centre. Temples were built in honour of Apollo and other gods since the 7th century BCE, and the golden era lasted until the 1st century CE. Every four years, Delian festivals were held on the island. They consisted of sports competitions, music and plays, much like the Panhellenic games that were held in those days – the Olympic games, among others. Smaller festivities took place every year. A theatre, a stadium and a hippodrome were built for the celebrations.

The stone theatre was completed around 240 BCE and could accommodate 6500 spectators, mostly visitors during the festive season, since the permanent population was still quite small at the time.

During the Roman era, from 166 BCE, Delos was also a major trading centre – particularly of the slave trade. The population of this tiny island – only 3 km in length – grew to 30 000, and there were people from many ethnic groups. That’s why many foreign gods – Egyptian and Syrian – also had their temples built on Delos.

It was forbidden to be born and to die on Delos. In the 6th century BCE, the dead were exhumed and removed to nearby Ríneia, and over time, a large necropolis grew there. Terminally ill people were transported to Ríneia, as well as pregnant women, as their time drew near. Otherwise, the residents lived like in any other town, cultivating their vineyards, olives and vegetable patches, going to the market, attending ceremonies and plays.

The Theatre Quarter is the oldest district in the city. During the Roman period, the population grew quickly and there was no town plan or regular street layout. Wealthy and average people built their houses side by side, with no class distinction. Small shops and workshops opened out to the narrow, crooked streets. The living quarters were assembled around a central courtyard, often with a mosaic floor, rich in detail and ornament, and surrounded by rows of columns.

The House of Dionysos has a mosaic floor with the deity pictured riding a tiger. Outside, a smaller feline relative is resting in the shade of a doorway. Although a very familiar sight on a Greek street today, cats were not common during ancient times. Perhaps a foreign tradesman could have brought a cat with him, but weasels and ferrets were more commonly used to keep away vermin.

The House of Cleopatra boasts the statues of owners that passers-by would see whenever the door was open. The inscription in the base lists their precious gifts to the gods. In the House of the Dolphins, the mosaic was signed by a Phoenician artist. Perhaps that’s why the entrance to the house bears a symbol of Tanit, the Phoenician moon goddess.

Delos, like most of the Cyclades, is a very dry island. It never rains during the summer. In the winter, rainwater was collected from the house roofs and terraces. The huge theatre was used as a water catchment basin, with large, vaulted cisterns for collecting rainwater. The city was complete with a drainage system and private latrines in the more prominent houses. In the photo gallery below, you can see the toilet in the House of Dionysos, and a drain running in the middle of a street.

Everywhere you look, there are pieces, fragments and crumbs of an ancient civilisation. In such multitudes, there’s no way to avoid treading over them. And despite hoards of pirates, looters and archaeologists who pocketed a great deal of the stuff over the centuries. If you look closely, the entire island seems to be made of hand-carved pieces of marble.

The atmosphere on Delos is very different compared to another sanctuary of Apollo’s, Delphi. Instead of massive mountain slopes, dense forests and lush streams, there’s nothing on Delos but rock, blue water and blue skies as far as the eye can see. And the eye can see far. I climbed the steep stairs to the top of mount Kýnthos. Out of breath, I stopped at the windy summit and could see nearly all of the Cycladic islands. Kykládes, “encircling islands”, with Delos as the centre point. It’s a well-chosen place for what probably seemed like the centre of the universe in the eyes of the ancient Greeks. I will need some time to digest all this.