Despite sailing criss-cross around the northern Ionian last summer, we never happened to visit Kalamos and Kastos, two rugged-looking islands. We passed them many times, often uncomfortably close, and always close-hauled – their rocky shores seemed somehow very difficult to avoid!

Rocky Kastos, with high Kalamos looming in the background. Click the image to see a bigger picture.

But since we were pottering around here again, why not make a point of visiting them? We also wanted to visit a couple of mainland villages nearby, and so we set sail from Nidri on Saturday, June 19th. We anchored in front of the beach in mainland Palairos for a couple of nights. It was a nice little town. The weather was unusually hot for June, even in Greece. But equipped with a cockpit sunshade and many heavy-duty blowers inside the boat, life was quite bearable. Not to mention the swimming pool we happen to have both on our front and back yards! 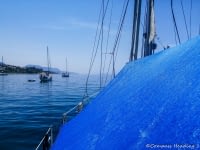 From Palairos we sailed south to a little village called Mytikas. There was no hurry, so after the morning breeze had withered away and before the afternoon wind arrived, we floated for a while in the middle of the Ionian with flapping sails. In the afternoon we reached Mytikas and anchored in front of another beach. There was not a breath of air at night, so the next day we decided to move across the strait, to Kalamos island. There we found a nice breeze, and once the day-trippers were gone, we were the sole owners of a quiet little beach and mountain.

Kalamos is a very high, densely forested island. It’s actually just one big mountain that rises from the depths to 754 metres above sea level. There are two villages, Kálamos on the southern side and smaller Episkopí on the northern side. Most of the island’s 500 inhabitants live in the Kálamos village. Tourists increase that number quite a bit during summers.

From our private anchorage, we motored to the Kalamos village. There we had a cup of coffee and filled a couple of jerry cans with water. Then it was time to find an anchorage for the night. We took a little spin around the bay of Porto Leone at the southwestern end of Kalamos but found it too crowded with boats. The village of Porto Leone was abandoned after an earthquake in 1953 that devastated large areas of the Ionian. The old church still stands.

We like to have a bit more room around us, so we continued to Kastos island just across the strait, and anchored in a little bay called Sarakiniko. It felt strangely like something in our Baltic home waters, with a small islet in the middle of the bay, and rocks jutting from the water in many places. But there were only a couple of other boats, so we had plenty of room to swing around. When it’s very hot it’s imperative to have good airflow through the boat. That’s not possible in a marina, or even anchored with stern to shore, as the wind shifts in many different directions during the day – usually 180°, but often much more. This screenshot of our tablet plotter shows Aina’s midsummer dance during our stay at this anchorage!

Sarakiniko bay, Kastos. The small islet in the middle has a tower, where a young Italian entertained us one evening with opera songs. Kalamos in the background.

We celebrated Finnish midsummer in Sarakiniko bay, but as the forecast showed some growing northwesterly winds, we decided to move to the southeastern side of Kastos. The Kastos village has a beautiful, large anchorage in front of a rocky shore and small beaches, and there’s also a nice bay right in front of the village. It seemed particularly popular with flotilla boats, and many were also moored at the town quay. At the very bottom of the bay, there’s a really small, protected fishing harbour, where we parked our dinghy and explored the village. It’s a very pretty place with many restaurants and bars – one of them in a handsome old windmill – and even a little grocery shop. Only 80 people live here year-round, but during summer the population is about 500.

We enjoyed a rare dinner out and even drinks afterwards. The music bar had a great view over the dusky harbour and anchorage. What a cosy, beautiful place. These rocky, rugged islands had turned out to be very approachable after all! It was the end of June, and from Kastos we would sail towards Ithaca, the home of Odysseus. More about that next time!