We sat under the scorching sun in the Almerimar Marina, waiting for the strong winds to calm down, so we could continue our journey east. In Almerimar there was no sign of any winds, so it felt funny to think there could be 30 knot winds blowing on the other side of the cape. When the forecast showed only 15 knots, gusting to 25, we left.

The sea outside was calm, but we did find the wind on the other side of the cape. Lots of wind! This was our first lesson on how to interpret the wind forecasts in the Mediterranean. The average wind seemed to be 25 knots, the waves were high and steep, the weather brilliant and hot! The same wind on an October night in the North Sea would have felt scary, but the bright sunshine and deep blue waves with their pretty whitecaps didn’t seem at all as threatening. But we felt a bit uneasy, and decided to be very conservative with our sail plan, especially while rounding all sorts of capes, because we had an idea of how much these kinds of local land formations and other local phenomena seem to affect the weather in these waters. It’s wise to remember the golden rule for reefing early: reef as soon as the thought first crosses your mind!

We were especially worried about the notorious Tramontana, a strong northerly wind that originates in the cold air of the Alps, and according to many sources, can come out of nowhere at a moment’s notice. In reality it’s not quite as unpredictable – it’s affected by certain low pressures, and can be forecast much like any other wind. But unpredictability and changeability are well known facts about the Mediterranean weather, which should be taken seriously. Tramontana is a frequent visitor in the Balearic Islands, but we would be making landfall at least a couple of days before any northerlies were expected.

We travelled along the African coast for the first day and night, beating into the wind with the engine running, as the waves would otherwise stop our progress. Later we were able to turn north, towards Ibiza and Formentera. But as we were nearing those islands, we decided to sail straight to Mallorca. We had no particular desire to spend time on the Balearic islands, because it was almost August, the high season was at its highest, prices would be exorbitant, anchorages full of boats and beaches full of people. We knew we could not afford a single marina visit, and we knew there were practically no all-weather anchorages on the islands. The winds would be very changeable, both by strength and direction, and having to leave an anchorage in the middle of the night after a sudden turn of the wind was not unheard of.

But we wanted to stop at Mallorca for a particular reason: friends of ours were staying there for their holidays. So, after successfully anchoring near Palma de Mallorca on June the 27th, and having rested sufficiently after our 3 day passage, we rowed our dinghy to the beach and took a bus to the center of Palma to meet our friends. What a fun reunion, and how lovely to walk and stretch our legs on the pretty streets of the old town. On the following night we got to meet a local couple as well, and taste wonderful local specialties under expert local guidance! 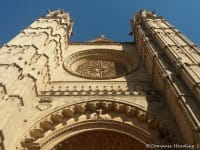 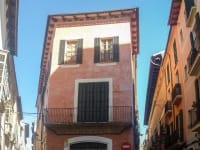 Life at anchor was both dramatic and leisurely. Our first anchorage was protected from the westerlies, but many boats seemed to have issues with their anchors dragging. A large sailing catamaran broke completely loose while its owners were away, and glided through the anchorage and out to the sea, where it was fortunately stopped and brought back. The nights were quiet, but during the daytime the bay was so full of jetskis, power boats, sup-boards, water toys and swimmers, it was really a wonder that no accidents happened. We also saw such a number of huge super yachts, it didn’t seem quite real – the biggest of them had a helicopter on the roof.

A couple of days later the winds turned east, and we found another anchorage on the opposite side of the bay. It was busy, too, but much quieter than the first one. Still, some dragged anchor, and one afternoon we found a large catamaran only a metre away from our bow! The owners were away this time too, but somebody else was able to re-anchor the boat so it didn’t move any more. We let more chain out, to keep our distance, and as soon as the crew came back at dusk, they immediately moved the boat to a different location. The failing of the anchor is one of our biggest fears, naturally, even though we haven’t had any problems yet. But it’s hard not to think about it while you’re away from the boat. What if we came back after a pleasant night out, and our boat had picked up and left without a trace!

We enjoyed our short time in Mallorca, swimming in the warm water and relaxing in the sun. But it was time to continue, and on the 2nd of August we again headed out to sea. There was only a light breeze, but there was a sailing regatta on the Bay of Palma, and those racing boats seemed to be moving much faster under sail than we did under engine power!

The wind caught us as we passed between the mainland Mallorca and the Cabrera Island, but – again! – it was against us. The same wind kept blowing almost all the way to Sardinia, Italy – well, we are familiar with tacking in adverse winds, so at least in that respect our Mediterranean adventure felt like nothing new.

The lights of the Sardinian coast started to blink in the wee morning hours of August the 5th. We would arrive before sunrise, and decided to try and anchor in the darkness – sooner or later we would have to, anyway. The conditions were perfect for this first time, as the wind calmed down, the visibility was great, and apart from a couple of fishing boats, there was no traffic. We had marked a couple of good anchorages on the chart, and a little cove close to the town of Calasetta on the small island of Sant’Antioco seemed the most appropriate. There were only two other boats, so we had plenty of room to find a suitable spot. Our anchor hit the bottom at 4:30 am. After a little morning nap we launched the dinghy, and motored into the town of Calasetta, in the hope of some good Italian espresso, and fresh produce to complement our diet, and found all we were looking for.

A couple of days later, as the winds shifted, we moved to another anchorage across the sound, on the island of San Pietro. From there we dinghied into the town of Carloforte for some laundry, lunch and groceries, although the 3 mile ride in some waves and wind was not a very smooth one. The anchorage in front of the beach of Spiaggia di Guidi was very pleasant. There were still plenty of dayboats from the neighboring marinas, but it was nothing like the hectic beaches of Mallorca.

Winds seemed pretty good again, so we decided to continue towards Sicily, after spending only three nights in Sardinia – in fact we never set foot on the island of Sardinia proper, if truth be told. We had a good feeling about the place, nevertheless – the islands and towns were beautiful, the water turquoise and crystal clear. But the visit was really too short to get out of the passage mode we were in, after several consecutive long legs of the journey. We never even got the camera out of its bag!

It took two days and two nights to sail to Sicily. After so many offshore miles this summer, the blue horizon had clearly lost some of its lure. It felt good to think that after this passage, we could take our time for a while, only day sailing and stopping at interesting towns and villages. We pointed in the general direction of northwest Sicily, and approaching the coast in some pretty fresh north-easterly wind, decided to go to Trapani, where there’s an anchorage in the port. It was still windy inside the breakwater, but at least there were no waves. We dropped the anchor, and it stuck. What a relief!

One week to Midsummer! Looks like we'll spend it o

Boat jewelry 🤩💍💎 My absolute favourite of

Wow! We have an electric outlet! Just one, but wha

Looks like a project... or two! 🤣 One ticked of

After the pressure wash, she doesn't look too bad

We're on dry land! Time for some scheduled mainten

Pretty Vasiliki at the southern end of Lefkada - j

Simple but so good! Kythiran salad - we had someth

Today it's all sunshine and pleasantness! Now, if

Last glimpse of Pylos in the morning, as we left t