The island of Naxos has a lot to see – you could easily spend several fully packed weeks here. This time we only had a day to tour the island on a rental car, but we managed to get a very nice glimpse of the island. We headed east, over the hills, from Naxos town. The further we got from the rugged coastline, the greener and lusher the landscape became.

The hillsides are covered with cultivated terraces from the green valleys up to the rocky peaks, and you can count on seeing a small church on each summit. While there’s surely a sauna in every cove and vale in Finland, here in Greece there are churches, chapels and monasteries in every imaginable spot!

Naxos is the largest and greenest of the Cyclades. It produces its own vegetables – very tasty potatoes among other things – olive oil, fruit, honey and wine. Wine has been grown here for thousands of years. No wonder that in ancient times, Dionysus, the god of wine, fertility and divine ecstasy, was the number one deity worshipped on the island. He married Ariadne, a Cretan princess and monster slayer, here in Naxos, and turned water into wine at the wedding party.

The most famous export product, along with wine and potatoes, is Naxian white marble. The oldest marble artefacts date back to the Neolithic stone age and were traded with nearby islands. During ancient times, marble quarries grew into a big business. Many of the temples and sculptures on the sacred island of Delos were made of Naxian stone. The most famed one was probably the nine-metre tall Colossus of the Naxians, a Kouros statue from the 7th century BCE, depicting Apollo as a young man. 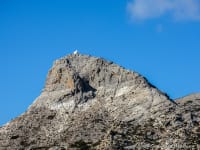 The beautiful stone is also abundant in local towns and villages – in houses, churches, street pavings and the endless stairs of the mountain villages. We drove to see Apeiranthos, the iconic Marble Village. It’s situated on the slopes of the Fanari mountain, 600 metres above sea level. The view over the hills and woods is spectacular, but the village is too far from the coast to have a sea view.

Apeiranthos was reputedly built by Cretans in the 9th century CE. The dialect spoken in the village is still different from that of the rest of the island – I think we might have missed the finest nuances, though. The architecture is authentic Venetian and seems to be pretty much in its original form today. The streets are very narrow and winding, most of them are actually staircases, with frequent arches and vaulted passages. There’s no way to avoid getting lost, but that’s the whole point of meandering in places like this!

Cars are of little use in getting around. The most practical way of transporting stuff is still on the back of a donkey, like this white little cutie with her load of firewood. The chainsaw is obviously a slightly more modern addition.

We had now trotted up and down the streets for hours, and it was time to continue the road trip. We spun around the northeastern end of the island to catch a glimpse of the sea and a few smaller villages. Koronos, spread across both sides of a deep valley, was particularly pretty.

It was afternoon, and we were getting a bit hungry. We headed towards Chalki, a small village that seemed to have a number of restaurants, but on the way there we noticed a sign pointing towards some ancient church. Well, we had to stop to see it, and what a gem it turned out to be! It was just ten minutes to closing time, so we couldn’t linger for long. The place is absolutely worth a thorough visit.

The church of Panagia Drosiani was built during Byzantine times. Its oldest part dates back to the 7th century, a small space with a domed roof, all built from rough local stone. It has been extended in many stages. The atmosphere inside the dim room, lit only by a few small windows placed high, is nothing short of holy – however that may be interpreted.

There are over two hundred Byzantine churches on Naxos (from the 7th to 15th centuries). Many of them were richly decorated with mural paintings, some very well preserved to this day. The oldest frescoes from the 7th century of Panagia Drosiani were discovered when several newer layers were removed during restoration works in the early 1970s. The church originally belonged to a monastery.

During the middle ages the population of Naxos was mostly concentrated inland – because of the fertile land, naturally, but also because the coast was frequently raided by hoards of pirates. Most of the old villages still remain in their original places.

We enjoyed a late lunch or an early dinner in Chalki, and then it was time to return home to Aina. After a quick laundry and supermarket run the next morning, we were ready for a change of landscape. Our next destination was the famous island of Delos which I’ve mentioned several times in this blog already. More about it soon!