The most famous sailor to ever roam the Mediterranean sea was, no doubt, Odysseus. All of us later colleagues have heard of him, and in many ways travelled in his wake. Odyssey, the epic poem of Homer, is a story about a war hero trying to find his way back home from the Trojan war (around 1192-1184 BC). He was the king of Ithaca, and it took him ten years of adventuring to make it back. There are many candidates to every place depicted in the story, including Odysseus’ home island. Some have placed his Ithaca on Kefalonia or Lefkas.

Aina’s anchor came up on the 28th of June on the island of Kastos, and we headed towards Ithaca. There was a friendly breeze that, unusually, lasted all day, and so we could sail the whole way, apart from being becalmed for a little while in the lee of Atokos island.

We anchored for the night in the beautiful Filiatro bay, with white gravel beaches and mesmerizingly turquoise water. 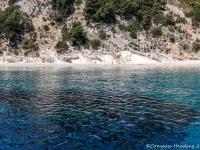 The next day we anchored in a vast Aetos bay. It’s where a narrow land bridge connects the northern and southern parts of Ithaca. It was windy but there were no waves. We had a huge superyacht for company, with a helicopter that frequently flew over the bay, perhaps bringing guests from the airport.

A little later, we moved closer to Vathy, to a small cove called Dexia, and dinghied into the town. Eventually, we felt brave enough to go to Vathy altogether, and anchored in the big town bay. We saw mayhem and mishaps, with many boats mooring into the town quays in the rising afternoon wind – no doubt with some crossed anchor chains and maybe some minor bumps and dents. We counted more than 200 yachts in Vathy, so it was no wonder there was a rush hour in and out every morning and evening.

Vathy is a very windy place. We knew it before going there but were still surprised at the strength of the afternoon breeze. The prevailing summer wind blows from the northwest. First, it accelerates down the huge mountain on the northern side, then gets pushed through a narrow, fjord-like channel and into the town at the very bottom of it.

Vathy suffered greatly in the 1953 earthquake that left Kefalonia and Zakynthos levelled. Before the destruction and rebuild, it must have looked very different, with small whitewashed houses surrounding the harbour like an amphitheatre. Not many old houses remain, and the newer concrete buildings are not as inviting. But the town is still beautiful, especially at night, when the lights are reflected in the calm water. As the evening fell, the wind finally subsided, and the night air was full of chatter, laughter and football cheer from the many bars around the bay.

From Vathy we travelled north for some time. We saw the church of St. Ilias on its rugged cape. We took a spin around the pretty village harbour of Kioni, and inspected the anchorage at Marmagas beach, with the tiny church of Agios Nikolaos on its tiny island.

The anchorages seemed crowded in this area, so we turned and went back to comfy Filiatro. From there, we did some exploring of the rocky shoreline and found a great snorkelling spot at the end of a stony spit. A vertical wall continued into the blue depths, and there were many fishes and some underwater flora, too.

We continued to Kefalonia and anchored in front of Sami town. It was a good place to get some water for our tanks, and some fresh veggies. The reason for stopping here was the Melissani cave, one candidate for the Cave of Nymphs, or Naiads, of Odyssey. It was very pretty, but the skippers manning the rowboats, with their songs and jokes that echoed in the cave, were nothing like the ethereal freshwater goddesses you would expect to find in a cave of nymphs.

On the way to the cave, by the seaside, there’s a small lake of Karavomilos. It’s a real geological wonder because it gets its water from the opposite side of Kefalonia. There are sinkholes near Argostoli, that swallow seawater, which then finds its way through underground rivers to the eastern side of the mountainous island. Along the way, it gets mixed with fresh water, which is why the Karavomilos lake water is brackish.

In early July, the anchorages in the northern Ionian were beginning to get very busy. Our Nordic souls seemed to need a bit more peace and quiet, and we knew we would find it further south. It was time to head towards Zakinthos, the southernmost of the Ionian islands. The search for our own Ithaca continues – or perhaps in our case, it’s the Odyssey that matters.

Film recommendation: Oh Brother, Where Art Thou? by the Coen brothers (2000) is based (very loosely) on Homer’s Odyssey. Bonus: the best soundtrack ever!