The silhouette of Mont-Saint-Michel must be the most popular image of French travel destinations in tourist guides and magazines. It is spectacular – the three million people who visit the place every year will testify to that!

Our winter base in Brittany is but a short distance from this marvellous island, located at the foot of Normandy’s peninsula on the opposite side of the bay from us – so it was naturally one of the must-see places during our stay. We had friends visiting us from Finland, and together the four of us managed to pack two weeks full of things to see and do. We saw Mont Saint-Michel on the first day of our roadtrip by car that meandered west from the edge of Normandy, along the coast of Côtes d’Armor, and reached as far as the rocky shores of Plougrescant at the northernmost tip of Brittany. 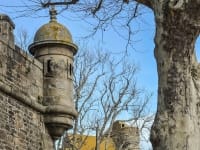 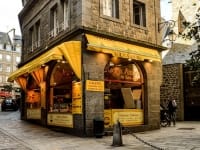 On our way to the famous monastery, we stopped briefly at Saint-Malo. It’s an ancient city, founded during the 1st century AD, and completely surrounded by medieval walls and ramparts. Not many of the buildings survived the bombings of the World War II, but the city has been reconstructed since, and is a very picturesque place intra-muros. Sailors, for some strange reason, tend to look for vistas over the sea, where ever they go. Saint-Malo is definitely a place not to be missed in that respect! The views from the high ramparts over the wide blue horizon were magnificent.

Before continuing to Mont Saint-Michel, we stopped for lunch. It turned out to be a very wise decision, for we had only a very vague idea of the number of steps we would have to climb that afternoon. But if there’s one thing I’ve learned during my previous travels, it’s to eat, drink and use the sanitary facilities whenever available, whether you have a pressing need at the time or not.

Mont Saint-Michel is a rocky formation, with the highest point of 92 m, in the middle of a flat sea bottom. It’s situated about 1 km from the mainland, at the mouth of the river Couesnon. The tidal range here is significant, around 14 metres (46 feet) between high and low water. Before a new bridge was opened in 2014, it was connected to the mainland by a tidal causeway, and impossible to reach during high tide. We happened to visit during low tide, and there were people walking all over the sea bottom. But it’s not wise to venture too far, for when the tide comes back, we were told it can advance at the speed of a galloping horse! No wonder the island remained unconquerable for so long.

A place so unusual as this has naturally been a holy site for a very long time. The first people to use it for their rites were celtic druids who dwelled in the surrounding forests of the mainland, but Christianity arrived as early as the 4th century AD. The first small chapel was built halfway up the hill, then called Mont Tombe, and celtic hermits populated the island. Colourful and varied historical phases followed, involving Franks, Vikings, and Bretons to name a few.

The building of the Romanesque church at the very top began in the 11th century. To support the structure there is a maze of older crypts and chapels underneath. As you arrive through the gates, there’s a small town of pretty medieval buildings, once the houses of craftsmen and merchants, now full of souvenir shops and pricey restaurants. The steps keep winding up and up, past monastery gardens and cobbled, stone walled courtyards, until you reach the platform on top and enter the church. The view from the top is breathtaking, and on a windy day it feels like you could be blown away!

The choir of the church was built in Gothic flamboyant style during the 15th and 16th centuries after a collapse of the original structure.

Merveille – the living quarters of the monastery in Gothic style date back to the early 13th century.

After the French Revolution the monastery was turned into a prison. During that time a large tread wheel crane was installed for hauling supplies. Prisoners walked inside the wheel to rotate it.

With aching legs, we took a shuttle bus back to the parking lot, a couple of miles inland. Everyone slept like babies that night at our boat home, s/y Aina, and the next day we were happy to take it easy, enjoying the local beach and views of Binic. Then it was time to continue our roadtrip to Brittany!