It was already the 1st of September when we untied our lines in Kalamata Marina and headed south. We didn’t want any more interaction with the port authorities under any circumstances, so we stayed a safe distance from the coast, and rounded the Mani Peninsula and the Cape of Tainaron at night.

In the morning we anchored in front of a wide sandy beach on the island of Elafonisos. It was a sheltered place to wait for the northerly winds to pass, so we could get past the third cape of the Peloponnese, Malea, notorious for rough weather.

A couple of days later we could continue. We were headed for Toló, at the bottom of the Gulf of Argolis – Argolikos Kolpos. There we would finally meet the crew of a Finnish boat s/y Relax for the first time, after messaging with them the whole summer. Toló would also offer good shelter from our first meltemi. After all, we were now officially in the Aegean Sea, and we had learned enough about the phenomenon to respect it.

On the way to Toló we passed the town of Monemvasia. It looked absolutely worth a proper visit, but there was a lot of swell and we felt good to continue through the night. But we did a fly-by to get some photos.

The island of Monemvasia was first inhabited in 583 by mainland people seeking refuge from the Slavic invasions of Greece. At the turn of the first millennium, it was a thriving Byzantine commercial and maritime base that withstood the Arab and Norman invasions, although fell briefly under Frankish rule during the 13th century. After the fall of Constantinople in 1453, it was governed by the Venetians until, along with Nafplio, fell under Ottoman rule. Monemvasia was liberated in 1821 during the Greek War of Independence. 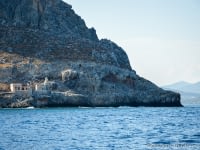 We made it to Toló in the middle of the night and anchored in front of the quiet village. The next morning we moved to a better place next to our Finnish companions. The weather was grey and gloomy, the first proper rain in months. Despite that, we managed to get ourselves acquainted with the small village and above all, our new friends. We enjoyed our evenings at both Taverna Relax and Rotisserie Aina and found them both extremely cosy and delicious.

Kilada and the Franchti Cave

Once the meltemi had blown itself away, we moved a little further south, to Kilada. We anchored in a small bay next to the Franchti Cave and went to shore for some exploring. This cave was inhabited by hunter-gathering people, possibly as early as 35 thousand years ago. More evidence has been found from 20 thousand years ago and onwards. During that time, the seashore was still many miles away. The cave was abandoned about 3000 years ago but was later used as a shelter for animals by the local goat and sheep farmers.

The Kilada village is very small and quiet. Kilada Bay is one of the most sheltered anchorages in the area.

Next, we stopped at Porto Heli. This crescent-shaped bay is a safe year-round anchorage, but the town seemed rather dull.

We continued around the corner towards the north and took some photos of Spetses from a distance. It’s a popular tourist island, with a constant flow of taxi boats and ferries darting back and forth.

We anchored for a night in the big bay of Dokos island, then continued to Poros the next day. Entering Poros from the east, you travel through a narrow strait, bordered by pretty houses, restaurants and moored sailboats along the length of the whole northern shore. The town looked very lively and charming. More boats were moored on the northern quay, and taxi boats and large passenger ships were busily coming and going.

Where could a shy little Finnish sailboat find a spot in a busy beehive like this? It was already quite late in the evening, and everywhere looked crowded. We continued on about a mile and found a good anchoring spot in the Russian Bay. It’s a nice place with a sandy beach and the ruins of an old Russian dockyard. The Russian Navy used to be stationed here, as they fought side by side with the Greeks against the Turks during the Greek War of Independence – read about the Battle of Navarino here. Today there’s a Greek Naval Academy in Poros.

The next morning we moved closer to the town as soon as there was room in the anchorage. Poros is a popular spot with the charter sailors and flotillas, and during the high season, the town quays start to fill up early in the afternoon. We like a bit more privacy and use our dinghy to go shopping or a cup of coffee, sometimes even a meal at a restaurant.

Poros was a good place to wait for another windy spell to blow over. Once the weather would settle again, we would leave and explore the Saronic Gulf, its islands and coves. What would we find there?