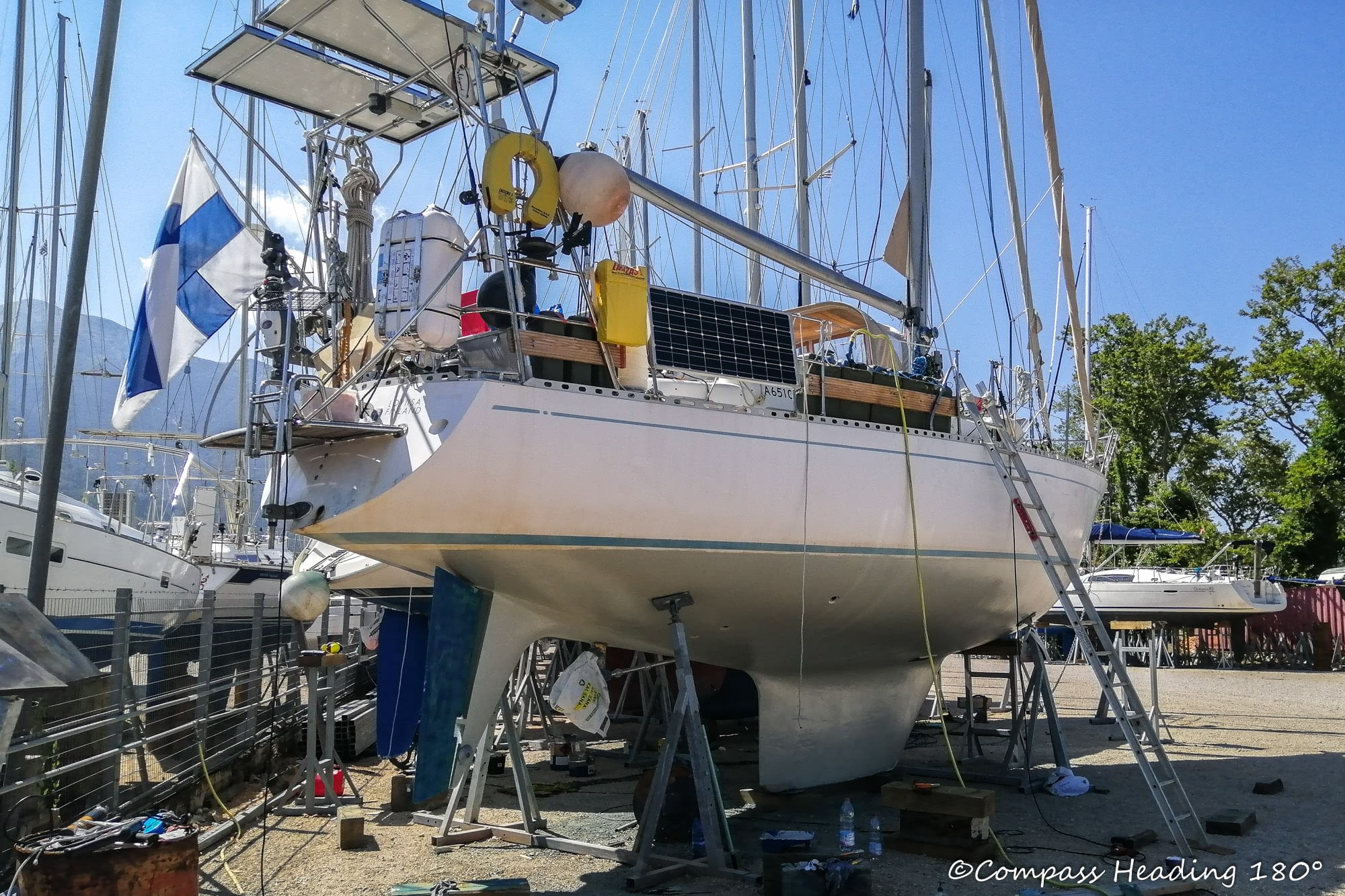 The warning given in our last post still stands: This blog post is about DIY boat refit. We had finally finished sanding our boat’s hull, and because no moisture was found and hardly any other damage, we could start painting on the epoxy barrier coat straight away.

A fibreglass boat needs a waterproof coating under the waterline. Epoxy barrier coat, provided it’s sufficiently thick, will provide that. If done by professionals, the epoxy coating is often sprayed on, but because we are profound DIY people (read: frugal. Ok: poor) we prefer doing things with our own hands, or in this particular case, with paint rollers.

We chose Hempel’s Light Primer, because it was easily available from the professional people working on other yachts on the boatyard. There was also the option to buy a little more from them in case we should run out – a very high probability.

Epoxy is a two-component paint. You mix the ingredients from two pots together, and you don’t want to make any more than you’re going to use at one time. We started off with a very small amount, not wanting to risk large quantities of paint turning solid too early. It was very warm, between +25 and +30°C (+77 and +86°F), so we knew it would not take very long for the paint to dry.

It turned out, though, that we could paint the whole hull on one go while the paint remained in liquid state. After the first, rather experimental coat, we found that the best method was to paint the western side first thing in the morning, while the sun was on the eastern side of the boat, and in the afternoon, as the sun had shifted to the west, we could paint the eastern side. This way, however, we couldn’t paint more than one coat per day, which was less than we had planned.

Our dear little lady was starting to look staggeringly pretty after the first couple of coats! Of course the hull could have been smoother and shinier, but we thought it still looked pretty good, considering we were two amateurs doing this sort of work for the first time. Anyway, it’s all going to be underwater, so very few will ever see it in real life!

For almost a week, our daily schedule was exactly the same: after breakfast mix the paint, paint the western side – one of us working on the waterline, one on the nether regions – then short break with perhaps a smaller job or two inside the boat, in the afternoon mix the paint, paint the eastern side, take a shower and hit one of the local tavernas for a nice dinner, come home and go straight to bed. During the most hectic working period there was no energy left for cooking at home.

After six coats of epoxy we were satisfied (and indeed had needed some extra paint) and the boat was looking great. After the final coat, we applied the first layer of antifouling paint, as it’s said to be the best way to make it stick. We’ll find that out later, but we used the same antifouling as last time, as it did the job very well.

Before launch – what a beautiful word – the epoxy coating would need about a week to cure properly. It finally seemed like we might be ready to sail one day! But there was still plenty to do. Now we could finally get to the projects we had come here for in the first place – before we found out about the state of our boat’s bottom and had to alter all of our plans – namely replacing the through hulls, seacocks and associated plumbing. Sounds exciting, doesn’t it? Well, great news: that’s exactly what I’ll be writing about next time! Oh, not so exciting? Well, the Ionian Sea awaits just around the corner, and we’ll get there before long!