The small island of Aegina sits in the middle of the Saronic Gulf, south of the Piraeus harbour. This triangle-shaped island is about 12 km wide and has a population of 9000. There’s a frequent ferry service from Piraeus, so it’s pretty crowded during the summer season.

We sailed here from Epidavros, just like the island’s first inhabitants in the Mycenaean times. Aegina became an important trade centre about four thousand years ago. A huge gold treasure from the Greek bronze age (around 1800-1500 BCE) was found here – it can be admired in the British Museum. The first European silver coins were minted here, and the Aeginan standards for weights and measures spread across the entire Greek world. The trade connections reached as far as Persia and Egypt.

As Athens gradually grew into a maritime power from the 5th century BCE, the days of greatness were over for Aegina. It became a popular holiday destination, with its great location and many temples. 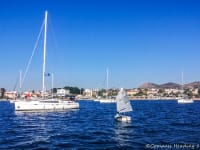 The harbour of Aegina seems quite sheltered, and it was full of charter boats. We avoid going to marinas, so we anchored outside the harbour in a flat, sandy bay, and took the dinghy to town. You have to be careful when entering the harbour, as the fast ferries, “cockroaches” as we call them, come in at full speed and slow down just before hitting the dock. You don’t want to end up too close to those beasts when pottering around in a small rubber dinghy!

The town turned out to be quite charming. The price of espresso was at the higher end of the scale, but the fish market next to the town quay was well stocked and reasonably priced. Behind the fish market, along a narrow street, we found cosy little tavernas and had lovely seafood lunch in one of them.

After a couple of days of ferry swell and the sporadic tinkle of the church bells, we were ready to leave Aegina town behind. Again, we only made a short day sail, this time to the opposite side of the island. On the northeast corner of Aegina, there’s a small anchorage called Agia Marina, which is fairly sheltered from the northerly winds. The wind got quite fresh and the waves choppy during the afternoon, but it calmed down as soon as we got to the bay.

It’s a short walk from Agia Marina to the temple of Aphaia. Short – well, that’s true, but it’s steep uphill all the way! It was already early October, but the weather was still very warm and sunny, so it was quite a sweaty climb. But, as usual, the destination was worth the journey.

The temple of Aphaia is one of the best-preserved temples in Greece. It still stands in almost complete form, on top of a hill with a handsome view over the whole island. The temple was built around 500 BCE, in Doric style, on a large terrace. Most of the sculptures and statues have been moved to museums in Munich and Athens.

This is the only temple dedicated to the goddess Aphaia. She was originally a forest nymph from Crete named Britomartis, and enjoyed hunting and running in the woods. That’s why she became friends with Artemis, the goddess of hunting. Minos, the king of Crete, fell in love with the beautiful maiden, but the feeling wasn’t mutual. To escape the king, Britomartis threw herself into the sea and got tangled in fishing nets. Artemis felt sorry for her and to save her, turned her into a goddess. She was rescued by a fisherman who brought her to safety on the island of Aegina. The fisherman fell in love with her, too, and didn’t want to let her go, but this ancient #metoo woman managed to escape into the pine woods of the island and hide there for many years. In Aegina, she became known as Aphaia, the deity of agriculture and fertility.

Next, our journey continued to the Aegean islands! What do you think we would find there? Well, more temples, that’s for sure…