Archaia Epidauros or Palaia Epidavros, whichever is the official name of the place, was a significant harbour throughout ancient times. According to Homer, it supplied 25 warships for the Trojan war. Today it’s a small fishing village, with a sheltered marina and some tourism. The more popular Epidavros, particularly known for its huge theatre and sanctuary dedicated to the god of healing and medicine, Asclepius, is located about 10 km inland.

The Ancient Epidavros sits at the bottom of a sheltered bay in the western end of the Saronic Gulf. The ancient city was built on a small peninsula, Nisaki, that still protects the harbour from the southern side. We anchored on the opposite side of Nisaki, in front of the Loutra beach. It was a short walk from there to the village, but a lot more room to anchor. Besides, the chart mentioned a “Sunken City of Ancient Epidavros” right next to the anchorage, a temptation an enthusiastic diver couldn’t possibly resist!

After a whole summer of rounding the Peloponnese, we were suddenly just a stone’s throw away from our last winter’s home base, Galaxidi. Well, not exactly a stone’s throw, but about 50 nautical miles. A passage through the Corinth canal would have taken us here in no time, but last winter there was a severe landfall in the canal, and it has remained closed all year. 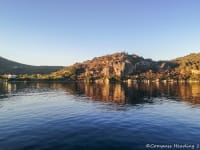 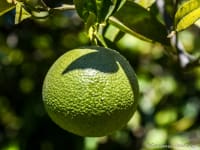 Rounding the capes of Peloponnese and the islands in the Argolic and Saronic gulfs, we had become used to rather barren landscapes. The green hills, orchards and gardens of Epidavros, blooming with fruit and flowers, reminded us of the lushness of the Ionian sea and the Corinth bay.

We took a walk up the hill of Nisaki. The first thing we encountered was an ancient theatre – just like that, literally in the backyard of someone’s house. This little city theatre was built in the 4th century BCE and had room for about two thousand spectators.

The old acropolis, with its temples and other public buildings, was situated on the slope and hill behind the theatre. Only some stone walls remain from the ancient era. There are also ruins of a Byzantine church. Another chapel, Zoodochos Pigi is still in use. The view from the hill towards the village and marina is very pretty. Click the photo to see a bigger image!

After the worship and celebration of Asclepius concentrated in the bigger inland sanctuary, the old harbour city turned into a holiday centre for the Roman patriots. Luxurious private villas were built. One of them sank a couple of metres below sea level during an earthquake, and can still be seen underwater. The sunken city is not quite a city, but it’s fascinating to snorkel among the stone walls, tiled patios and huge ceramic storage jars, all dating from the 2nd century CE.

The ceramic jars are more than a metre wide. That’s a lot of wine, olives and whatever the Roman patriot must have grown in his orchard and offered to his guests.

The well-to-do of today (and some more ordinary folks), just like their ancient predecessors, enjoy their summer days in Epidavros. A superyacht parked close to the shore, Aina and her friends in front of the beach.

After a couple of very warm, sunny days the wind started to blow strongly from the north. The anchorage was a fairly sheltered place to sit out the windy, rainy weather, and eventually, the summer came back. We weighed anchor and headed back east. Our next stop would be the island of Aegina – more about that next time!

Find out more about the anchorage of Ancient Epidavros on Noforeingland!