I was a teenager when I first visited Crete. It was my first and only holiday trip “south”. Besides the beautiful beaches and too salty but wonderfully warm water, I’ve never forgotten my visit to an island of lepers. Decades later, we had arrived in the same place on our own keel, sailed past the famous island, Spinalonga, and anchored in the sheltered bay behind it. It was time to hop in the dinghy and visit the island fortress again.

Spinalonga fortress. Click the image to see a bigger picture!

The most poignant period in the island’s history began in the early 1900s, when it was turned into a leper colony. But the story of Spinalonga began long before that. Originally, it was part of the Kalydon peninsula. The steep hill was fortified during the ancient times to protect the city of Olous and its port. The Venetians, who ruled Crete from the 13th century onwards, destroyed part of the peninsula and created a small island, and turned it into one of the most powerful fortresses in the whole Mediterranean. It remained under Venetian rule until 1715, long after the rest of Crete was conquered by the Ottomans in 1646. 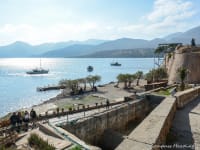 The Ottoman period on Crete was full of rebellion and hostilities. Many Cretans took part in the Greek War of Independence during the 1820s, but Crete itself remained an object of contention between the Ottomans and the western powers until, finally, the last Ottoman troops withdrew in 1898. A union with Greece was formed in 1908, and in 1913 Crete became a part of Greece.

The last Turks left Spinalonga in 1903, and lepers began to be transported to the island from different parts of Crete and later also from the Greek mainland. Formerly, these “cursed” or “living dead” had been cast out of the society to fend for themselves. Leprosy is one of the oldest diseases known to human kind. For millennia it was associated with a strong social stigma and diverse beliefs, and had no cure. The bacterial infection destroys skin and eye tissue, nerves and respiratory tracts, and causes gruesome pain. Numb limbs are prone to injury, and amputations were a common treatment.

The sick were separated from their families and sent to isolation on Spinalonga. From the harbour, they would walk through a long tunnel, “Dante’s Gate”, into the massive fortification. No one returned. The dead were buried on the island’s northern shore, near the church of St. George. In the early days, the patients were not treated in any way, and the living conditions were appalling. People lived in the houses and ruins left by the Ottomans. Water was collected in old cisterns from the Venetian period, and local fishermen would bring supplies from the mainland. In the early 1930s, around a thousand people lived on the island, waiting to die sooner or later. But they took care of each other, of the children and the elderly, relationships were formed and babies were born. Healthy newborns were taken away and raised by their relatives, or in orphanages.

Things took a turn for the better in 1936, when a young law student from Athens fell ill and was brought to Spinalonga. The “Fraternity of Patients of Spinalonga”, founded by this man, Epameinondas Remoundakis, began to fight for the rights of the sick. A school and a church were established, cafés and other small businesses were set up, houses were renovated and the surroundings improved. Two large dormitories were built in the late 1930s, one for men and one for women. They were reserved for the patients needing constant care. A power generator made work in the hospital easier, and brought enjoyment to the patients in the form of music and films. During WW II, Crete was occupied by Germany, but the lepers continued to live on their island in peace. The Germans supplied them with food, in the fear that the infection might spread if the sick decided to elope.

During and after the war, scientists experimented with antibiotics – including those that could cure leprosy. The first drugs were administered on Spinalonga in 1948, and gradually, the number of patients started to decrease. People were allowed to leave the island. The last twenty patients were moved to an Athenian hospital in 1957, and the era of the leper colony was over. The last inhabitant, a priest, stayed until 1962, to commemorate the last people buried on the island until five years after their death. Spinalonga sank into oblivion. Local people, many of whom had had relatives or acquaintances on the island, didn’t want to dwell on the memories.

In the 1980s, Spinalonga began to attract tourists. Today it’s the second most popular destination in Crete, right after the Palace of Knossos. Tour boats run all day long from Elounda, Plaka and Agios Nikolaos. During our visit in November, it was still busy with vistors.

Click the map to see it in a bigger window!

The weather was beautiful during our visit – sweet breeze, beaming sunlight and the bright blue sea. But it was hard not to feel sadness and grief for the people who had lived here. What were their thoughts as they stood here on this Venetian wall, looking at the horizon?

Book tip: Victoria Hislop – The Island (2005), a historical novel set in Spinalonga tells the story of a Cretan family. Romance included! There’s also a tv series based on the book. Victoria Hislop has written several books set in different historical moments and places in Greece.