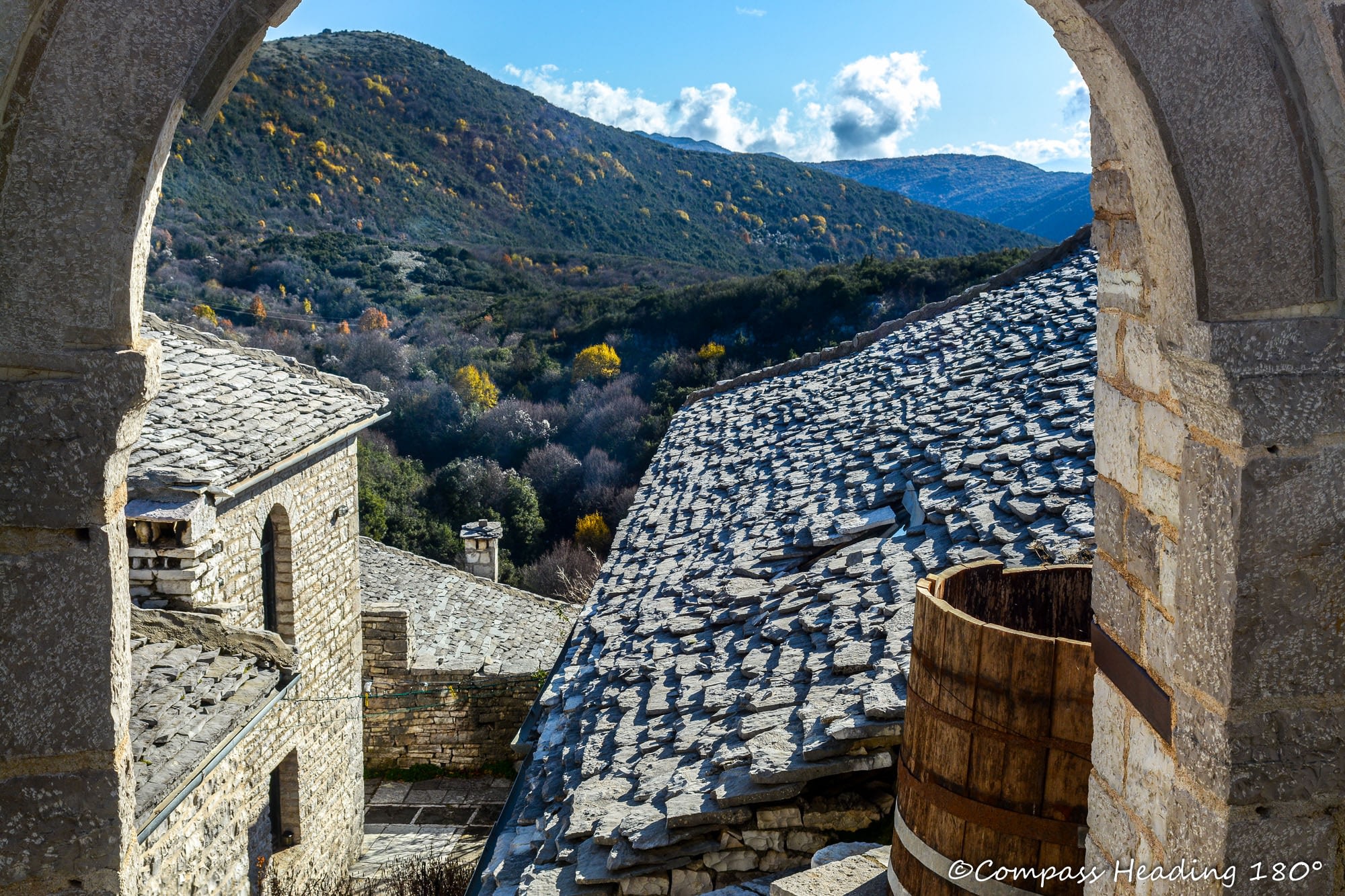 During the first days of our mountain holiday in Zagori, we visited the mountains and the spectacular gorge that I wrote about in a previous post. In earlier brief history, I mentioned that there are also 46 old villages built of stone – now it’s time to visit some of them! These days there are less than 4000 inhabitants in the area. In the heyday, the number was many times that. Fortunately, travellers interested in nature, hiking, biking, horse riding, canoeing, climbing and other outdoor activities are beginning to find their way here, as well as those who are into history, architecture and stone construction. And for people who just love rocks – we happen to have those among our friends – it’s an endless goldmine. Let’s start the village tour in Ano Pedina, where we were staying. Here, like in most Zagori villages, the central square is dominated by a stone bell tower, a well, and a large plane tree. We found the bell tower of Ano Pedina particularly handsome. Next door, there’s a church, and down the hill below it the Monastery of Evangelistria. There are a handful of restaurants around the village centre, but they were closed during the week we spent in the village. They just started to prepare for the Christmas season when it was time for us to return to our boat. Not many restaurants were open in the other villages either, so we were very lucky to be able to use the guesthouse kitchen to cook our meals.

The Zagori villages can be divided into western, central and eastern villages. The central part is the liveliest, while many of the eastern villages are totally abandoned – they suffered the greatest damages during WW II and some were never rebuilt afterwards. The central villages are situated fairly close to each other and were connected by paved roads and bridges long before the modern roads were built in the area. But there are many villages that are so isolated, that their inhabitants might never have visited the neighbouring village, even though they could see it across the valley or the gorge. The terrain was so rough and wild that only shepherds, hunters and tradesmen would have had any business going there. Because it was such a remote place, the Ottoman rulers had no interest in occupying Zagori.

The remoteness also suited monasteries, which were built from the Byzantine times onward in the most unimaginable places. Christianity endured in the area, and some churches and monasteries were built even during the Ottoman rule.

The Monastery of Panagia Spiliotissa is from 1665. A stone-paved path leads there through an ancient forest. Close by, the Voidomatis River meanders through the woods, and there are smaller, dry riverbeds crisscrossing the area, that fill in the springtime.

At the far end of the forest, we crossed a bridge and knocked on the humble wooden gate. Nobody answered, but we turned the latch and, to our surprise, the gate opened! We sneaked quietly into a small forecourt, where we could see a part of the structure that clings to a vertical rock face. It looks like it has grown out of the rock, and actually, some of the chambers have been built inside caves – hence the name of the monastery: The Holy Mother of the Cave. Looming on the very top we could see the oval-shaped cupola of a church. The silence was deafening, it was only broken by the quiet murmur of the river far below, and the occasional chirp of a bird.

In the village of Monodendri, we saw a few tourist buses. Here the restaurants were open, and delicious looking gyros were cooking on the grills outside the restaurants – but only with a prior reservation! The village was very pretty, and there were great views over the lower mountain ridges.

Elafotopos, not far from our own village, is built high on a gorgeous riverbank. We had just stopped by the roadside to take photos when an old lady walked briskly up the hill. She was dressed in black and looked like she had been walking up and down the hills all her life. Golden teeth were flashing as she was trying to tell us something. Oh, to be able to understand Greek, even just a little – perhaps she could have told us what it was like to live in her village before the modern world arrived.

One day we decided to find a few of the famous Zagori stone bridges. There’s a big cluster of them close to the village of Kipi. On the way there we first found the Kokkoris Bridge, one of the most photographed bridges of the area. It crosses the river in a narrow place, with vertical stone walls towering on both sides. The bridge is about 24 metres long and has a semi-circular arch that’s 12 metres high. There was just enough water in the river to make a perfectly round reflection. The Kokkoris Bridge was built in 1750 and is held together merely by the laws of physics.

Next along the road is the Plakidas Bridge, possibly even more famous than the previous one. It has three arches, and the road that goes over it makes funny bumps.

Just before the village of Kipi, there’s the Lazaridis Bridge, which I just photographed from the car window. On the opposite side of the village, we found the three-arched Milos Bridge, which leads to an old watermill. Inside the building, the millstone and other machinery seemed to be in working order. This is where we encountered the packhorses that I mentioned in the first Zagori post. The damp smell of horses in the quiet, misty forest made us feel like we were walking in a dream.

Each night we returned to our comfortable lodgings with our heads and memory cards full of impressions. It was time to cook some dinner, sit back, and enjoy the peace of the mountains.