After leaving our winter base, Messolonghi, we rounded the southwestern corner of mainland Greece. Next to a small but very high, rugged island called Oxia we hoisted the sails for the first time. Our destination was a boatyard on the island of Lefkas, to the northwest, where our boat would be lifted out and we would spend a month or so doing boat projects “on the hard”. But before that, we would have a little mini holiday of at least a couple of days, and we planned to use it anchoring in pretty coves and getting a little first glimpse of the Ionian archipelago.

The wind was against us, naturally, and also very light. We weren’t making more than two or three knots of speed, but that was a perfect, gentle start for the season. We could adjust ourselves to a moving boat again – and we were moving at a visible speed without the engine. Stronger winds were forecast for the afternoon, as it often happens in this area – the mornings are very still, then an afternoon breeze comes, often veering gradually as the sun moves, and then calms down just in time for a quiet evening and night at anchor.

We figured it might start blowing around 5 pm, so we enjoyed a nice lunch in the cockpit while the wind was still very light. New potatoes, herring and dill tasted very much like Finnish midsummer, and a few minutes before 5 pm we cleared the cockpit table and folded it out of the way of possible sail maneuvers. And as the clock struck 5, somebody turned on the wind! And we were beating into it, heeled over, waves crashing over the bow. Oh, the joy of sailing! The Ionian sea is a fairly protected area, being surrounded by large islands, so despite being quite choppy the waves never grew big. We decided to find some sheltered anchorage on the island of Meganisi, which wasn’t very far. 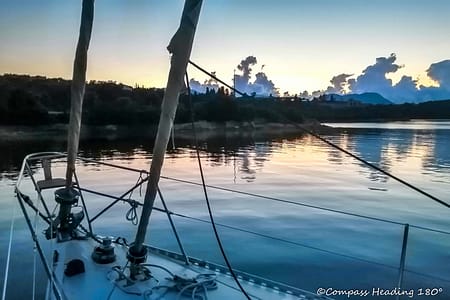 The right kind of place seemed to be close to the Abelake Bay, at the end of which we could see a few anchored boats. The smaller coves on both sides of the bay, however, were totally deserted, and that always appeals to us. In we went and found a great spot in the very middle of a small cove and dropped the anchor. It was seven months since we had last anchored anywhere, but the routine didn’t seem to have disappeared: anchor down, chain out with a scope of about five times the depth of water, attach snubber to the chain and reverse. Our reliable Rocna set on the first try, and as the engine was turned off we were surrounded by the deepest silence. The water was flat, there was not a breath of wind, although we could see whitecaps racing in the open sea outside. The steep hills surrounding the bay were dotted with little houses and tourist villas, but they all seemed empty. Twilight came, but no lights in the houses. Not a bad way to start the new sailing season – floating in our own private universe with a brilliant sunset.

For the next few days we kept messaging with the boatyard, and our liftout seemed to be postponed day by day. But it was so beautiful in Meganisi, we didn’t really mind. We launched the dinghy and motored around the nearby beaches and the pretty little village of Vathi. Our mini holiday stretched into five days – we washed the winter dust away as we swam in the clearest water (which was still a bit on the cool side at +20°C/+68°F) and enjoyed barbecue dinners in the cockpit.

But finally the boatyard was ready for us. A fleet of charter boats had just been launched, in the hopes of post-corona tourism, and there would be room for us. We spent one night anchored in Tranquil Bay opposite the village of Nidri in Lefkas, and on the morning of June the 4th we motored into the boatyard in Vlicho Bay. The boatyard workers caught our Aina with their hooks alongside a pontoon, then a trailer was backed into the water and underneath her. Our big lady sat down nicely and took a ride uphill to dry land. After the holiday it was time for a few weeks of serious boat work!