If you travel to a mountainous area, the first thing you naturally want to see there are the mountains! We found the Zagori area in northwestern Greece to be a true treasure trove of many other things as well – such as distinctive culture, history, stone villages and bridges, rich flora and fauna and all sorts of strange and wonderful things – but the mountains would be a good starting point. And those gorges and mountains are really the reason why the history and culture of Zagori turned out the way it did. Also, you can see very far from high places and easily form a general idea of the area.

In our last blog post, I wrote a short summary of the history of Zagori.

We left our lodgings in the village of Ano Pedina in the morning, drove past the villages of Vitsa and Monodendri to peek into the Vikos Gorge from a southern viewpoint called Oxia. There was a short walk from the parking area to the naturally formed platform at the gorge’s edge. 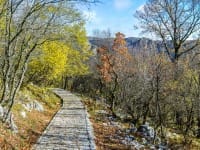 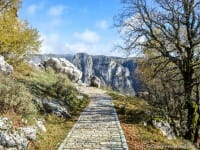 It had been a cold night, and although there was hardly a cloud in the deep blue sky, the gorge was filled with thick fog. You could see the opposite wall of the canyon looming through the mist, and somewhere far below, there was the murmur of a river. This is where many small mountain brooks flow into the canyon and form the river Voidomatis. Voidomatis meets the larger river Aoos at the other end of Vikos Gorge, close to the northern edge of Zagori, and Aoos, in turn, flows into the Mediterranean Sea in Albania. The Vikos Gorge is about 20 km (12 miles) long, and depending on the method of calculation, it might be the deepest canyon in the world. And it was deep, that’s all I can say! We didn’t need reassurance or calculations, our stomachs could tell us all we needed to know. Neither of us has been seasick during our sailing journey so far, but here, on the canyon’s edge, we certainly felt queasy!

On our way back we stopped at Stone Forest, a wonderful area of stratified limestone – like high piles of pancakes! The view wasn’t bad either.

Another day, almost as sunny as the first one, we drove further north to look into the same Vikos Gorge, but from a different viewpoint. Just like watching the sea, you can never get bored looking at mountains. The changing seasons add their own charm to the mountain landscapes. We drove our poor little car up and down the mountainsides, around valleys and over ridges, with endless hairpin turns, until we reached the small village of Vikos, at the northern end of the Vikos Gorge.

The landscapes along our journey were spectacular.

Vikos turned out to be a charming little village, with a big stone church. The cafes and restaurants were closed just like in almost every village we had seen.

And then we found the view – and it didn’t disappoint!

In the next post, we’ll see plenty of stone villages and perhaps a few bridges, too!