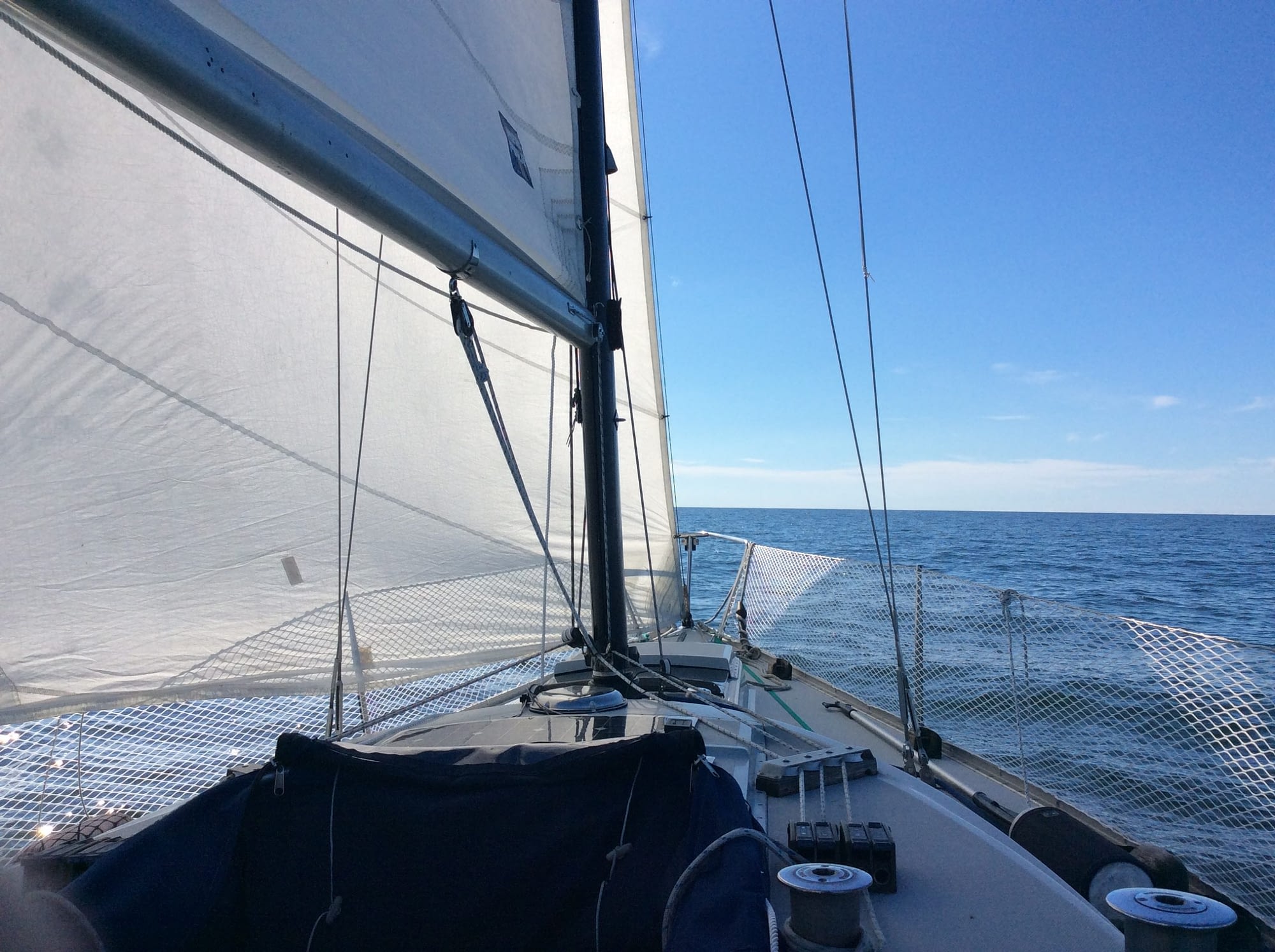 If a picture is worth a thousand words, how many does a video count for? I put together a little sailing video, hoping to show some of the joy and excitement of being carried by the wind, moving fast along the water.

On our way to our next destination, Hiiumaa island off the northwest coast of Estonia, we experienced some of the best sailing we’ve ever done anywhere, on any boat. There was a brisk southerly breeze and we were making good speed on our little boat. By this time she had acquired a large number of affectionate nicknames, most of them referring to her compact size, her pear shaped body, her respectable age, or all of the above. Nevertheless, she proved herself to be a true thoroughbred among sailboats, sailing solidly and effortlessly like a much larger boat. As the wind increased and the waves got bigger she just seemed to grow taller and heavier but remained as responsive to the helm as ever, letting us steer her with just a finger or two.

However, as we got closer to Hiiumaa we found ourselves in a situation we hadn’t prepared for. The sea bottom rises to a very shallow depth many miles off the coast, making the waves suddenly very high and choppy. This combined with the large sail area that just minutes before had given our boat a thrilling speed now made her heel like a mad woman. I had to get up on deck to take the sails down. It felt like riding a bucking bronco, first flying through the air and then diving deep in the water with great green walls rising on both sides. As I crawled my way to the bow and back, I could feel the waves go in through my collar and come out through the trouser legs. What I don’t remember feeling was bumping myself into something, and multiple times. This only became evident later that night, when we were all safe and sound in the Kärdla marina, relaxing in a warm sauna – I’ve never seen such massive bruises in such unusual places!

That’s when I realized that all the sailing channel sailboats on Youtube have furling headsails. You simply couldn’t lounge on the deck in a bikini with bruises like that – no, you should never have to leave the comfort of the cockpit except to take pictures of dolphins! For next summer, we will definitely invest in a roller furler. I can’t wait to shoot some bikini scenes!

Seriously speaking, it’s also a matter of safety. Hank-on sails may be the way to go on a racing boat, but we are cruisers. And when you’re cruising longer distances you’re bound to encounter rapid changes in weather. Although we always clip ourselves to the jacklines when leaving the cockpit, you can still get badly injured if you take a fall. And in any case, the boat deck is full of cleats and lines and other obstacles to smash you body parts into.

In Hiiumaa we got a serious reminder – something much worse than a few bruises – of just how important safety is at sea. Only a week before our arrival in Kärdla a sailboat skipper had fallen overboard, just a few miles out of the marina. The inexperienced crew, unable to stop or steer the boat, couldn’t help him, and despite their efforts the Search and Rescue didn’t find him either. The boat had been towed into the harbour and hauled out, and it was a sorrowful sight. If a simple thing like a harness and a tether can spare a life, how about we all wear them – even before the going gets rough!

I conclude my post with a few hazy pictures from our Tallinn-Hiiumaa leg. After all, a sunset over the sea is one of the reasons we sail for, isn’t it?

2 thoughts on “Sailing as it should be – and shouldn’t!”