The northen Åland archipelago was a turning point of our holiday trip. From here on, we would be heading east, homeward. But the holiday was by no means over, there were still many beautiful islands to visit and interesting places to see. After another sunny day of downwind sailing we happened upon the island of Vårdö in the eastern Åland. It was only a 6 hour’s sail or so, but the landscape had changed from rugged, rocky hills to rolling, green fields and lush orchards full of apples. We tied up to a quiet, peaceful dock with only a handful of other boats. The village itself was a bit further away, but we found two bicycles parked by the dock, free for the marina guests to use for their shopping trips. We immediately decided to try them out, as the shop would still be open for a while. 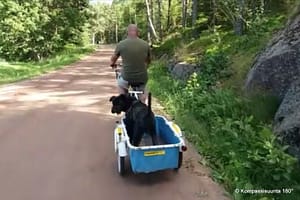 We tied our frizzy four legged crew member in the buggy and off we went! After a short ride past the fishing harbour, across the countryside and through a pretty village we arrived at the tiny supermarket. It was absolutely crammed inside, with the most impressive assortment of goods I had ever seen in such a small space.

There were many old, beautiful houses in the village of Vargata. For hundreds of years, this small island boasted the largest number of merchants and shipowners in the entire Åland archipelago. They were mostly farmers who started out with small boats. Later they built larger vessels that would carry their cargo to the market places in Stockholm, Turku, Helsinki and Tallinn. Many of them became very wealthy and built their stately homes in the village, with old anchors and even ship’s guns still decorating their front lawns. 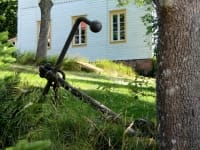 We found this place so peaceful and cozy we decided to stay another day. I went for a walk to visit an old stone church – with a mushroom shaped bell tower that appeared just a tad too big for the rest of the buiding. I love exploring old buildings wherever I go, and in the archipelago the churches have traditionally been the centres around which the village life evolves. The oldest churches in Finland are found here in Åland, as the religion spread to our country from Sweden.

Later, as Finland became the Grand Duchy of the Russian Empire, Åland included, new ideas were forced upon the people. They never really rooted – one amusing example were the many milestones lining the road I walked along. Old Swedish miles had to be replaced by Russian units, and distances to various cities were to be marked clearly. But the Finnish senate could not quite agree on the units, so they invented a Finnish mile instead, and that’s what was used in the milestones. And eventually, all the different miles were cast aside for the metric system. Talk about bureaucracy!