Navigare necesse est, like they used to say in Rome. But there are other things almost as important to us – like history and architecture, and especially these two combined – that are as much the reason for this journey as the sailing itself.

Three and a half weeks into our two-week boatyard stopover, and several days of freezing in a northerly gale we were quite ready for a little change of scenery. So we took a bus to the Gdansk railway station, boarded a train and travelled about 50 km to the southeast. There, in the middle of lush fields and pretty country villages, stands a magnificent medieval castle by the name of Malbork. 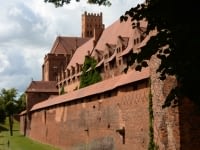 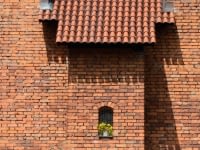 Malbork, originally called Marienburg, is the world’s largest brick castle. Series of defensive walls and moats surround the Outer Bailey, the Middle Castle, and the High Castle, complete with the Grand Master’s Palace and the Church of the Virgin Mary. The numerous yards used to be filled with auxiliary buildings, such as workshops, mills, armouries, larders, and cellars necessary to maintain a large army of knights and monks.

The castle was built by the Teutonic Order, formed in 1190 to aid Christian pilgrims in the Holy Land. Its original services included security and health care, but the Muslim invasion of Palestine made things a bit tricky and sent the knights north in search of new employment. After a couple of detours, they found it on the Baltic Sea’s shores, inhabited by ancient folks called Old Prussians. Here, humble charity work gave way to a more boisterous occupation of converting pagans with swords and bayonets.

The brotherhood had notable friends, such as the Holy Roman Emperor, under whose protection it quickly grew into an independent monastic state, spanning from today’s Poland to the northern reaches of Estonia. The knights monopolised the trade of amber and carried taxes from people and commerce. Their success in battle was based on the latest know-how in fortification technology and on their heavy cavalry. The Malbork Castle was one of over 120 castles from which the knights ruled their land. The building works started in the 1270s. In 1309 the Grand Master’s seat was moved to Malbork from Venice and the castle had to embody this remarkable status.

The knight’s profession provided a decent career path to the younger sons of noble families, who had no inheritance to look forward to. They took the oath of obedience, chastity, and poverty. But they didn’t have to give up all the pleasures, for big tournaments were held within the castle walls, and the fine vaulted ceilings could undoubtedly tell a story or two of feasts with no lack of food, beer or wine. On a normal day at the office, the knights were busy with projects like ”the Slaughter of Gdansk”, which left the whole town levelled. After a couple of hundred years, the ancient Prussian language and culture had vanished without a trace.

In 1410 the Teutonic Order lost the battle of Grunwald to the Polish King Wladyslaw II Jagiello and his cousin, the Grand Duke Vytautas of Lithuania. The Malbork castle could withstand a long siege with no trouble, but the knights’ payroll was delayed. For compensation, they sold the castle to the Kingdom of Poland, and in 1466 it became one of the royal residences. In 1772 Poland was divided into three parts, and the majestic Malbork castle was turned into barracks for the army of the Prussian kingdom. The soldiers had no interest in gothic architecture and used the great halls for equestrian training among other things.

At the beginning of the 19th century – lucky for us today’s tourists – historical monuments became fashionable. Restoration works were started to preserve what was left of Malbork, and during the next 100 years, the castle was painstakingly brought back to its former glory. Then the Second World War happened, and in 1945 more than half the castle was destroyed in a battle – back to square one! Fortunately, the drawings and documents from the previous restoration survived, which helped the work that is still ongoing. The Malbork Castle became a Unesco World Heritage Site in 1997.