A Coruña turned out to be a good place to enjoy city life for a few days. A successful crossing of the Bay of Biscay was reason enough to celebrate, and the friendly prices of the tapas restaurants were another good reason.

We had planned to anchor in a couple of different places in the Ría de Ares, while waiting to get an appointment for engine service in A Coruña, but the northerly winds were so strong we couldn’t even get out of the bay. After an hour of going nowhere we turned back and returned to the Marina Real.

Our bikes were put into good use again. How many times we have thanked ourselves for getting them in Amsterdam! Walking is nice too, but with a bike you can get so much further and see so much more even on a short stopover. On a sunny, but very windy day we biked a couple of kilometres out of the city centre to see the Tower of Hercules. It’s the oldest lighthouse in the world still working. The first one was, of course, Pharos of Alexandria, which collapsed in an earthquake more than a thousand years ago. The Tower of Hercules was built by the Romans during the first century AD. The top part was added at the end of the 18th century, when the tower underwent a substantial renovation. We didn’t go inside, as we hadn’t noticed the ticket office down in the parking lot, and didn’t feel like climbing up twice in the brisk wind. But the tower was a magnificent sight, standing alone on the windy cape. 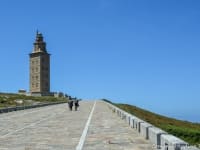 If you’re a fan of lighthouses like we are, check out the oldest lighthouse of the Baltic Sea – The Kõpu lighthouse that we visited on our sailing trip in 2016.

Most of the restaurants, bars, and fancy boutiques are situated in a pedestrian part of town close to the harbour. Big cruise ships stop here every day, mostly from Britain, and the town gets really busy during the daytime. In the evening the ships leave, accompanied by loud disco music, and later the streets fill with locals, along with some long term tourists and sailors.

The centre point is a large square, Praza de María Pita, dominated by the big town hall. There’s a statue of María Pita in the middle. She’s a local celebrity and heroine, the wife of an officer who, after her husband was killed in battle, took up arms and led the troops of A Coruña to defend the city from the British, who then abandoned the siege and withdrew to their ships. This famous battle was fought in 1589.

The most typical and striking feature in the townscape are the glazed balconies, called “galerias”. They have been popular in the Galician towns through the ages, their very natural motive being the harsh, humid and windy weather. The glazed facades are mostly pointed to the south, to maximize the light and warmth of the sun indoors – quite the opposite to Southern Spain, where every house has window shutters to keep the sun out! The handsomest facades line the harbour, with parks and wide avenues popular among the locals and tourists alike.

We also explored the oldest part of town, and found the church of Colexiata Santa María do Campo, a convent, and the beautiful park of Xardin de San Carlós, where the British army general Sir John Moore is buried. He died in the battle of Coruña in the Peninsular war in 1809.

Finally we received a message from the boatyard, informing that the delivery time for our engine parts would be two weeks. How much longer we would have to wait to have the parts installed, they were uncertain. We didn’t feel like hanging around that long, so we decided to have our parts sent to us to some “convenient place”, where ever that might be, untied the lines and left. Well, to be honest, we asked a marinero at the office to come and tow us out of our slip with a motor boat! There was not much room to manoeuvre, and with a boat that will only go to port in reverse, we didn’t like to take chances.

The winds were more favourable this time. We got out to the sea, and had a pleasant, slow sail along the rough coast of Galicia and past the Sisargas islands. The beautiful, sunny weather made Costa da Morte, the Coast of Death, seem like a friendly, mellow place, but these shores are full of shipwrecks, and I bet in the days of yore it was not very common for the local fishermen and seafarers to die of old age. Unfortunately, in the modern times the coast has also suffered from oil spills.

The wind calmed down completely, and we motored into the marina of Muxia, arriving after dark. Fortunately it was very spacious, with very few boats, so it was easy to find a good spot. The next day we took our bikes and wheeled to the most popular tourist sight of the area, the church of Nosa Señora da Barca. It stands all alone at the end of a beautiful, rocky cape, and even on a perfectly calm day the lazy swell from the sea crashed against the rocks. Such settled weather is not very common around these parts – the rocks are worn beautifully smooth all the way up to the church, so it’s easy to imagine how far the waves can reach in bad weather! We saw a lot of people who wore hiking boots and walking sticks. This church is one of the stops along the Camino de Santiago.

Late the second night we got some Finnish company. A sailboat returning home from the Mediterranean stopped in the next slip, and we had a nice chat and drinks with our countrymen. The next morning we had some diesel delivered to both our boats, and then our neighbours were ready to start their Biscay crossing, northbound. Three days later they sent us a message, telling they’d made it nicely and in favourable winds. That was good to hear! We continued our journey a bit later the same morning, planning to round Cape Finisterre. That means the End of the World, and it’s also the end of the Coast of Death. We hoped it would also be the end of these gloomy place names!