Ría de Arousa is the largest of Rías Baixas, on the western coast of Galicia. It’s surrounded from every side by high hills, and the shores are dotted with lovely sandy beaches, small towns and numerous harbours. In the middle of the ría there’s a large island called Illa de Arousa, with its pine forests and beaches. The most prominent feature on this ría is the incredible number of viveros, mussle and clam cultivation rafts. There are apparently about 3000 of them on this ría alone. All the little bays are full of them, and to get to the different harbours and anchorages you often have to go a long way around the large fields, unless you’re brave enough to weave your way through. It’s possible to do that, because they are anchored vertically downwards, but there are many of them! It’s not recommended to arrive for the first time at night – the biggest fields have light buoys in the corners but the rafts themselves are unlit. 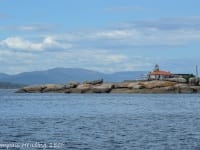 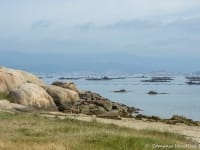 We anchored in front of A Pobra do Caramiñal on the evening of June the 3rd. There’s a marina right next to the anchorage, and we noticed the AIS signal of another Finnish boat in the marina. It was quite a surprise to find it was s/y Suwena, a Finnish couple who’s blog we have been following for many years! They have been sailing all along the coasts of Europe and are also blogging about their adventures in English. We contacted them, and set a lunch date for the very next day. We then spent many a nice moment with these lovely people, and even went on a long walk up the hill from Pobra with them. It was so nice to be able to talk in Finnish with other people, not just between ourselves!

Walking up a hill in A Pobra do Caramiñal with the crew of Suwena. The small buildings on pillars are old granaries, called hórreo. Click the thumbnails to see bigger pictures!

There was a southwesterly gale coming on Thursday, June 6th, and we felt safest to move our boat to the marina for a couple of days. The waves were pretty big even there, and the wind and rain beating so hard, we stayed indoors the whole day. The storm, named Miguel as it crossed the Biscay, sadly claimed the lives of a fisherman and three sea rescuers in Les Sables d’Olonne, France.

Suwena left on her travels, we stayed in Ría de Arousa and waited for some engine parts we had ordered from A Coruña. Finally they arrived, and we managed to get an appointment at the Xufre boatyard nearby. We were motoring halfway to the boatyard, when our engine’s heat alarm went off. But sometimes there’s luck in an unlucky situation: it was dead calm, so we had time to troubleshoot. Our boat was floating quietly in the middle of the ría, away from the shore and the viveros, it was only a mile to the nearest boatyard – and we had already made an appointment! Usually things break at the worst possible moment – in rough weather, close to a rocky lee shore, or in the middle of a busy traffic zone. We couldn’t find out the reason for overheating, so we just sat waiting for the engine to cool down, so we could continue in small hops. While we waited, a nice little evening breeze came, and we were able to sail the whole way to the boatyard, making one or two knots, and only started the engine a few hundred metres before the harbour to dodge the fishing boats moored there.

The engine service took a few days. We had fluent Google Translate conversations with Ramón the mechanic, and spent the days watching the buzz in the lively fishing harbour and getting a taste of the cafés and restaurants of the little village. As soon as the boat was ready, we moved to the marina in Vilagarcía de Arousa, to welcome a visitor from Finland. The next day we would make a car trip to Santiago de Compostela – more about that next time – and then we would do a little Midsummer sailing tour with our guest. But as soon as we had left the marina, our engine started beeping again! Still overheating! Everything had been checked at the boatyard, the impeller and the engine coolant had been replaced, thermostat tested. We took off the thermostat – no effect, the alarm went off again. We had no choice but to raise the sails and try to tack our way out of the bottom of the bay. It was very slow progress in the calm breeze, but at least the scenery was something to look at! We chose an anchorage we could get to, and so the Midsummer sail was rather deflated to a couple of day’s slow criss cross around the Ría de Arousa.

Oh well, the weather wasn’t exactly mid-summery either. While there was another super heat predicted over Scandinavia and Central Europe, we had reason to celebrate any temperature above 20°C (68°F). The water was still less, only about 17°C (62°F), so nobody felt like swimming. We had been aware that Galicia is not a very hot place, but it was still surprising to find how much colder the summer is compared to our northern homeland!

We sailed back to the boatyard – at snail speed – to continue to troubleshoot. Finally we found out there were several litres of coolant missing from the fresh water circuit. The coolant level had seemed normal, but there was possibly a large air clog inside the system that prevented it from circulating. After adding more coolant, everything started working just as it should! What a relief to find it was not something terrible and expensive! We motored happily to the other side of Illa de Arousa and dropped the anchor in front of the Praia Area da Secada beach and the lighthouse of Punta Cabalo. It was a suitable place to say goodbye to the beautiful Ría de Arousa, its viveros, sandy beaches and hills. The next stop on our journey south would be the paradise island of Illas Cíes.