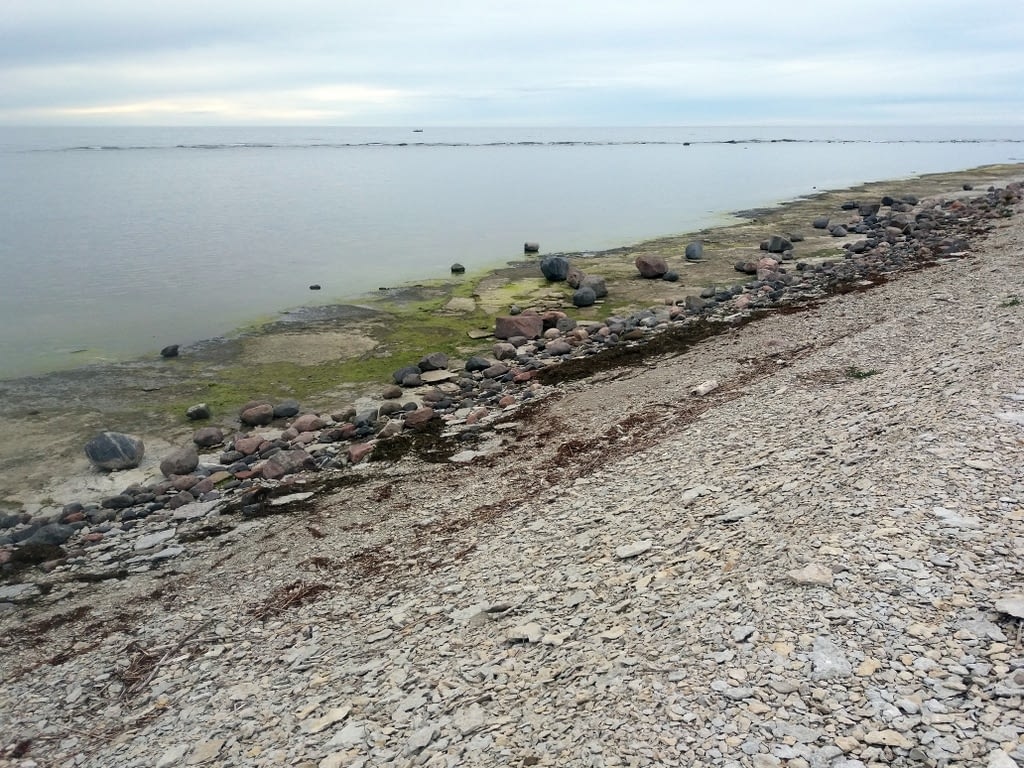 After the westerly storm had blown over Haapsalu the weather forecast showed a 12 hour window of no wind at all. Then it would start blowing heavily from the opposite direction. This was our best chance to leave, so we set off in the morning of August the 28th. The sea was calm, so we motored on. Many times along the way we would check the weather, each time getting a different forecast for the not-so-much wanted wind to pick up. I know, we have a sailboat and sailboats are meant to sail. They need wind to do that, but too much wind is not that nice in my Beginner’s Book of Sailing. Particularly if it catches you in the open sea. I felt like I had experienced enough strong winds for one holiday. I had nothing against a moderate wind, but as it was not on the menu, I didn’t really mind motoring in the dead calm.

After a doggy pee stop on a small island, we checked the weather again. Now it looked pretty certain that the strong winds would not bother us until some time the next morning. We might as well cross the Gulf of Finland right now. On the Finnish side of the gulf there are a lot of islands – much more protection from the wind and much less waves than on the Estonian side.

So off we went, puffing along in the beautiful, calm evening. Soon the Estonian coast was but a thin black line in the distance, disappearing into the evening haze. We had a nice dinner of smoked fish and hot tea. Then it was time to add layers of clothing as the evening got chilly. Soon the dusk fell and the whole sea was suddenly filled with lights – blinking lights, moving lights, unidentified lights. There were so many ships out there! Freight ships on their way to Paldiski or St. Petersburg, cruise ships on their way to Tallinn, Stockholm and Helsinki – or on their way nowhere, just hanging outside the Finnish territorial sea so our countrymen could enjoy their tax free refreshments.

By the time we reached the middle of the gulf with the busiest shipping highway, it was completely dark. It was very, very exciting looking at the green and red lights through binoculars. Particularly when the green and the red are side by side – meaning the ship is coming straight at you. What a relief, when after an eternity you finally see just one of them, and you know you’ve made it – the ship will pass you by your stern. With a sailboat that barely moves 4 knots under power I call this a pretty extreme sport. I didn’t blink all night!

We never saw the coast of Finland appear, not a single island or a rock. It had started raining, and the cloudy sky obscured the little moonlight there might have been. We followed a line on the tablet screen, flashing with a torch to see the buoys marking the channel, and finally a wooden pier as it emerged from the darkness. We had made it! It was past 2 o’clock in the morning as we tied the boat up, took the dog to shore, and then tucked in our bunks all three of us. In the morning we would introduce ourselves to the island that had welcomed us.