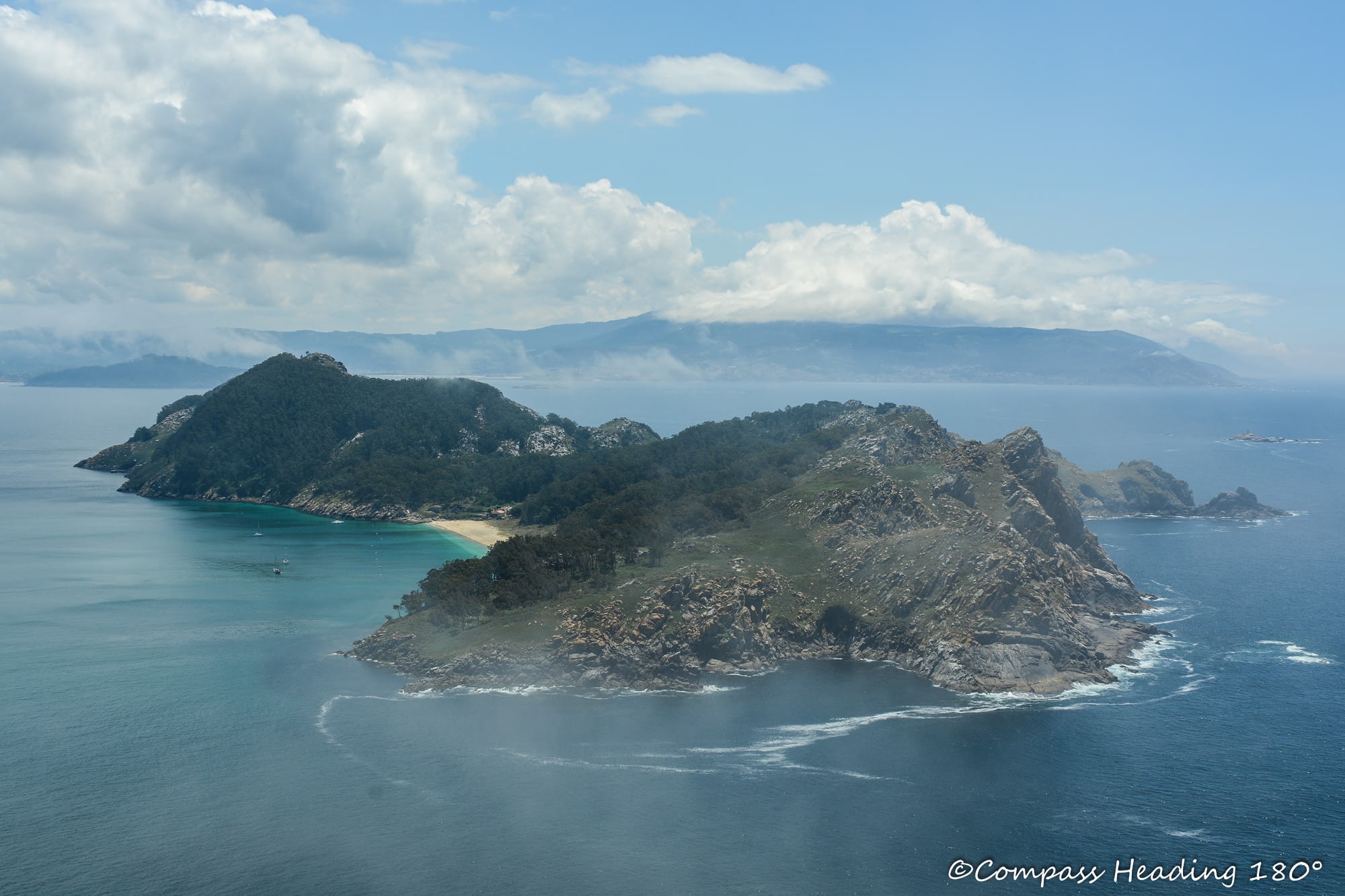 On the west coast of Galicia, there’s a large national park comprising of many islands and archipelagos, called Parque Nacional de las Islas Atlánticas. The largest of them, starting from the north, are the islands of Sálvora, Ons and Cíes, that provide shelter to the Rías Baixas from the Atlantic wind and swell. Some of the park’s islands can also be found deeper in the rías. To be able to visit any of the islands, you have to apply for a permit through a pretty straight forward online process (form to fill, instructions here). For anchoring, you need an additional anchoring permit – during the high season you can book up to three nights in advance. This is how they keep the number of tourists to a moderate level, so visitors can enjoy the experience in relative peace and quiet – a little bureaucracy is a very reasonable price to pay for a unique experience.

We had spent a couple of weeks on Ría de Arousa, enjoying some slow sailing, beautiful scenery and unfortunate engine problems, and were ready to leave for the islands of Cíes on June the 26th. There was a very light breeze, but now we had a working engine, so we both sailed and motored the few hour trip, according to which gave us better speed at any given moment. First we sailed past the national park island of Ons. It looked very rugged, with a few trees but mostly grassy moors, just like you would expect to find in Scotland of the Faroes.

In the evening we dropped the anchor off the white sandy beach of Praia de Rodas, Illas Cíes (see on Noforeignland). The beach connects two separate islands, Monteagudo to the north, and Illa do Faro – the Lighthouse Island – in the middle. The southernmost island is clearly separate and called Illa de San Martiño. The sun set behind the beach, and we enjoyed a wonderful dinner in the cockpit. It was warm, and the town lights along the surrounding Ría de Vigo began to twinkle in the twilight. There’s a saying in Finnish – the moment you untie the lines, or weigh anchor, you have arrived – and in a way we did that already a year ago. After all, we are just drifters going nowhere in particular, and anywhere we feel like. It felt very special to have arrived in a place like this – a paradise island with white, sandy beaches and turquoise water – all by ourselves, onboard our precious boat and our only home, sailing yacht Aina.

In the morning, we packed bottles of water and all our camera gear in our backpacks and rowed our dinghy to shore. The beach was already filling with people tanning and swimming in the (cold!) sea, as the first morning ferries had emptied their tourist cargo in the harbour. A bunch of walking trails start from the beach to all directions, all equally beautiful and spectacular. We decided to climb the Monte Faro, to see the lighthouse on the highest peak of the island (175 metres, 574 ft). The trail meanders over a bridge that connects the northern and middle islands, past a shallow tidal pond full of fish, crabs and other sealife, like a huge aquarium, then past the camping grounds, the only place for spending the night on the island, unless you have a boat. It looked like a cosy place with green tents, restaurants and shops.

The path then starts climbing higher and higher up a hill, through pine and eucalyptus forests, with more and more fascinating views over the sea and the island of San Martiño. On the steep cliffs, there are nesting bird colonies – mostly yellow footed seagulls, which we saw everywhere. They seemed pretty courteous and well behaved, though – for seagulls, except maybe the few that earn their living around the local restaurants. Next, we saw some rocks called Pedra da Campa, with holes in them, through which you can look at the blue sky above. Then we climbed some more, and finally saw the lighthouse on top of the hill, and a serpentine path up there, that looked like it would never end.

But we made it up the hill! And what a scenery! Up here it was easy to see how different the Atlantic side of the island is compared to the more sheltered, eastern side. The contrast between the rugged, alpine landscape and the mild, wooded side with its flower meadows is truly significant. If you sailed past the island offshore, you could never imagine what a gentle paradise can be found on the other side.

Another night fell, the bustle of the beach hushed down, and the last ferry disappeared with the last tourists. Even the sea calmed down. A few more boats arrived at the anchorage, and the sky grew dark over the white, sandy beach. How lucky we were, with this settled weather – this is not a protected anchorage for those windy, swelly nights – to be able to sleep our nights in peace and quiet, and enjoy the beautiful, sunny days in a place like this!

Stronger winds were forecast again for the following night, and we decided to take advantage of them and continue our journey south. On Friday evening, June the 28th, we weighed anchor and plaintively left the lovely Illas Cíes behind. The next morning, we would be in Portugal!